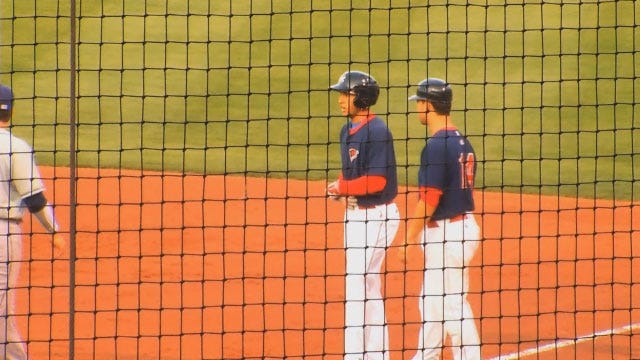 Preston Tucker homered in the first and seventh innings to drive in three runs in an 8-1 win by the Oklahoma City RedHawks Sunday against the Colorado Springs Sky Sox at Chickasaw Bricktown Ballpark in front of a crowd of 4,775.

Tucker’s two-homer performance marked his second multi-home run game since being promoted to the RedHawks (58-59) in mid-June from Double-A Corpus Christi. He now has five homers with Oklahoma City and 22 for the season overall.

Sunday’s win gave the RedHawks a 2-0 lead in their four-game series against the Sky Sox (47-68). They have outscored Colorado Springs, 21-7, through the first two games of the series.

Torreyes singled with two outs in the bottom of the first inning then Tucker followed with a two-run homer onto the Devon Energy Deck in right field to put the RedHawks in front, 2-0.

A RBI single by Torreyes brought home Jonathan Villar, who led off the bottom of the third inning with a walk, to put the RedHawks ahead, 3-0, with none out.

The RedHawks added four runs in the bottom of the fourth inning.

Villar opened up the scoring with a RBI single with one out and a bunt grounder by Sclafani put the RedHawks in front, 5-0.

Garneau grounded into a double play and brought home the lone run of the night for the Sky Sox in the top of the seventh inning to cut the RedHawks lead to six runs.

Tucker quickly responded for Oklahoma City, belting his second homer of the game on a fly ball to left field to lead off the bottom of the seventh inning for an 8-1 lead.

Colorado Springs starting pitcher Mike McClendon (2-4) was charged with the loss, allowing seven runs (five earned) on eight hits over 3.1 innings. He walked two and struck out one.

The RedHawks and Sky Sox meet for the third time in their series at 7:05 p.m. Monday at Chickasaw Bricktown Ballpark.