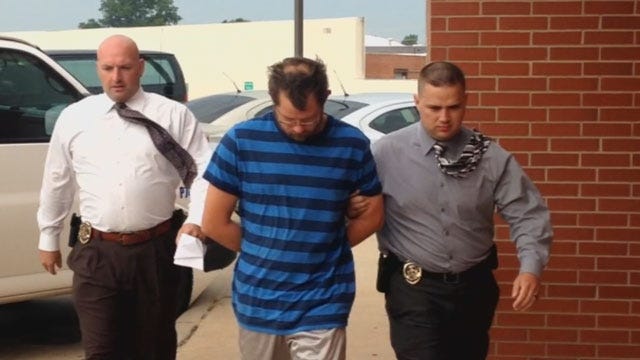 A bus driver for Edmond Public Schools has been arrested on complaints of lewd acts with an 8-year-old boy.

The two alleged acts took place on the same day in July of 2013, but the boy only recently told his mother that Jepson touched him at the boy’s home in Luther.

“We know the 8 year old that was a victim of this has a tremendous amount of courage to step forward,” said Lt. Charles Avery with the Oklahoma County Sheriff’s Office.

The boy's mother told News 9 Jepson is a family friend.

“Any kind of inappropriate touching is hard, but it's even harder when you're dealing with a child,” said Lt. Avery. “A child shouldn't have to go through stuff like this,” he added.

Jepson has been an Edmond Public Schools bus driver since 2006 and his access to kids at his job has them worried.

“We are concerned that there might be other victims or possible victims,” said Lt. Avery.

For most of his time with EPS, Jepson has driven bus 82.

He has dropped off kids to North High School, Cheyenne and Summit Middle Schools, and Sunset, Ida Freeman and John Ross Elementary Schools.

“No one, no student, no parent, has ever come forward with any complaints regarding anything of this nature,” said Susan Parks-Schlelpp, Director of Communications for the school district.

Jepson is still employed with EPS, but the district has started its own investigation.

Parks-Schlepp said Jepson has been a model bus driver with a great record and school leaders are troubled by the revolting allegations.

The school district will be contacting the parents of all the students who were on Jepson's bus route last year to let them know of his arrest.

Anyone with additional information on Jepson, or parents who have any concerns their child may be a victim, should call the sheriff's investigative line at (405) 713-1017.

"The allegations against Edmond school bus driver Scott Jepson are very disturbing. The district is deeply troubled by the idea that one our drivers could possibly be involved in this type of revolting behavior. We are cooperating with authorities in their investigation as well as conducting our own investigation into this matter. Although there has never been a single complaint concerning Jepson’s behavior with students, we will make every effort to contact the parents of the students on his bus route-beginning with last year-to make them aware of his arrest and to encourage them to contact authorities if they suspect that their child is a victim. Providing a safe and secure environment for all students is of utmost importance to Edmond Public Schools.”