Sunny And Hot Friday Across Oklahoma 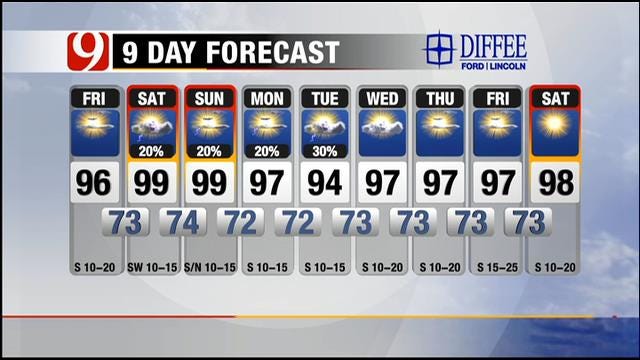 It is mild over most of the state Friday morning with 70s being reported in the majority of Oklahoma.

Morning skies are mostly clear with southeast winds at 10mph. Later, heat is in the forecast. We will make it to 96 degrees in the metro, near 100 degrees out west.

Rain chances for the metro are less than 20 percent in the afternoon. Northwest Oklahoma will have up to a 30 percent chance for showers and storms.

The rest of the state can expect hot conditions with a few high clouds. Southerly winds kick in 10-20mph. The weekend will be hot with upper 90s to near 100 degrees with slight chances for rain.

Heat will stick around most of the next week.

Sunny And Hot Friday Across Oklahoma