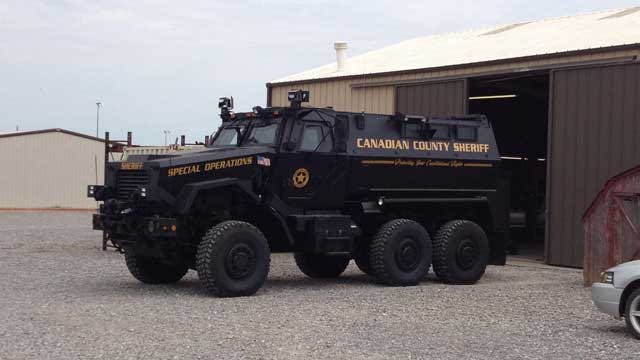 After days of protests in Ferguson, MO., there's been a lot of speculation about the "militarization of police departments."

Dozens of Oklahoma departments received military vehicles from the federal government and argue against that point.

Canadian County Sheriff Randall Edwards got the department two, multi-functioning military vehicles. Once covered in camouflage and desert tan paint, both are now in a matte black with department graphics.

One is the four wheel-drive, diesel engine Humvee, which sits high off the ground and can be used for whatever the Canadian County Sheriff's Office needs.

"Tornadoes, snow storms, ice, floods, we can use it in rescues and tactical operations if we have manhunts going on," said Canadian County Undersheriff Chris West. "We can use the vehicle in any of those types of situations, not only can we, but we will."

The department also has the gigantic six-wheel, eight-seater, MRAP truck, or Mine-Resistant Ambush Protected vehicle. West says there are about 28 in the state of Oklahoma.

The Guthrie Police Department uses one, as does the Enid Police Department. These heavy-duty armored vehicles come with a steep $700,000 price tag. Area law enforcement only paid a couple thousand dollars for them through the Department of Defense's (DoD) excess property program. Since 1997, the program has transferred more than $4.3 billion in equipment to agencies.

The big trucks have drawn even bigger criticism this week as people have watched the Ferguson Police Department use them during protests following the shooting death of 18-year-old Michael Brown. Critics say the vehicles only militarize police departments, but West says all the trucks are de-militarized and don't have machine guns strapped to them.

"There's no military systems, components or anything on them, they're just transport vehicles," West said.

“Just like it says on the sides of these vehicles, it's to protect your constitutional rights," said West. "The conspiracy theorists out there think we're going to come and take their guns. We're not going to do that; we would never do that.”

West says the vehicles are only a resource to protect deputies in high-risk situations.

“I know and have buried other officers, who were killed because they didn't have the luxury of vehicles that could protect them," said West. "Sheriff Randall Edwards said that we would be remiss to not take advantage of it.”

“If we never have an incident where somebody actually fires on us, and it has to stop a bullet or an explosive, if that never happens, that will be great too," said West. "But if we save one life because we do have it, whether it's a law enforcement life or a civilian, it's worth every penny.”

Last month, the DoD planned to suspend the federal surplus equipment transfer program, because the equipment did not meet current EPA emissions regulations.

Just this week, the DoD announced it would fully and permanently restore the program.