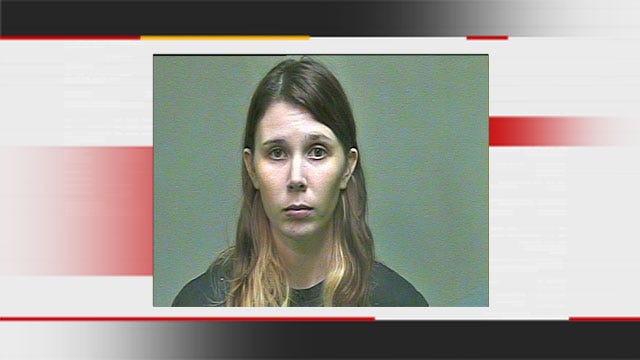 A Yukon woman was arrested on child neglect charges after a welfare check revealed the horrendous living conditions in which she and her two small children lived.

It all started Tuesday afternoon when an employee from Aaron's rental company went to the home of 24-year-old Katherine Carnes to recover some property that was delinquent on payment. The employee first noticed the children at the front of the home. The employee told police he thought both the children were wearing dirty diapers and that one of the kids appeared to be covered from head-to-toe in flea bites. After recovering the property, the employee felt compelled to call police to check on the children.

A Yukon Police Officer responded to the home just after 4 p.m. The officer initially noted seeing a number of living and dead flies in the front window of the trailer home. The officer made contact with Carnes and told her he was there to check on the welfare of her children. The first thing he noticed inside of the home was a strong smell of urine and spoiled food. He also saw a used diaper sitting atop a plastic trash bag lying on the living room floor.

The officer then saw Carnes' young son sitting on the couch. The officer says the boy had a number of scabbed sores all over his body and legs. When asked about the sores, Carnes said that her ex-boyfriend's dog had fleas that infested the house. But, she said, the two had been separated for two weeks and that she was treating the house and her child's sores and things were getting better.

The officer asked if she had taken the boy to the doctor and she said no because she did not have a car. The officer told her that two doctor's offices were in walking distance, but Carnes did not have a response.

Carnes then began to show the officer the rest of the house. Inside one of the rooms was another small child in a crib. The baby was lying on a pile of blankets. Inside the crib, near the baby's head, the officer saw a few black pieces that he believed to be rodent feces. There were also two dirty diapers on the floor next to the crib and a dirty diaper on a shelf in the closet. The officer also noted seeing a plate with syrup sitting on a box that appeared to have been there for some time.

Next, Carnes took the officer to the master bedroom that she shared with her son. Both beds in the room did not have sheets on them and the mattresses were visibly dirty, according to the officer. Dirty clothes and toys littered the room. When asked why there were seemingly no clean clothes in the house, Carnes told the officer that her washer and dryer broke down. The officer never saw a washer and dryer in the home.

The master bathroom was blocked by a baby-proof gate. The officer noted, unsurprisingly, that the sink and toilet bowl were stained and filthy. Dirty clothes also lay on the floor in there.

A second bathroom was sealed in the hallway of the home. Carnes told the officer the room was closed to keep the kids out and because there was a leak. When the officer opened the door he reported being “bombarded” by flies. The room was hot and filled with flies both alive and dead. Carnes then told the officer that there was a leak, but that her girlfriend, who had been staying with her for a while, left it dirty and that she did not clean it up when she left.

Blankets covered the window in the second bathroom. Fly feces were also covering the floor and countertops. The trash can was overflowing with dirty diapers. Even with the door closed, the officer noted that dead flies could be seen and were within reach of the children, should they walk or crawl by.

On every window throughout the house the officer noted seeing flies both alive and dead on the curtains and windowsills. The kitchen though, according to the officer, was the worst room in the house.

The door to the kitchen was also blocked by a child-proof gate. Four sticky fly tape strips, covered in dead flies, hung from the kitchen ceiling. Dead flies and fly feces covered every surface in the kitchen, according to the officer. A table was covered in spoiled or rotting food and the food was covered by flies feasting on the slop. The sink was full of dirty dishes.

On the stove the officer saw a pot with what appeared to be elbow macaroni and spaghetti sauce. The officer estimated that the food must have been sitting there for a week because “thousands” of flies were eating on it. Carnes told the officer it had only been left there a few days. The floor of the kitchen was just as bad; littered with dropped food and empty packages.

When asked how and why she could live in such conditions, Carnes told the officer that she “had not been feeling well for the past few days” and was “14 weeks pregnant.”

After looking over the home, Canadian County DHS was called. The father of the two children was also called. The father told police that he and Carnes were not married and that she kicked him out of the home a few months ago. He said he comes to visit when he can and that he was at the home the day before to fix a plumbing issue.

The father told police that since he has been out of the home he was working 100 hours a week to be able to pay for a lawyer to get custody of the children. He said he noticed the bites on his son while he was there for the plumbing, but he said Carnes told him she was taking care of it.

DHS had police clear the father through CIU to see if the children were safe to be placed in his custody. The father's record came back in good standing and he took care of the kids.

Photos were taken of the scene and Carnes was placed under arrest. She was booked into the Oklahoma County Jail on one count of Child Neglect. Her bond was set at $10,000.