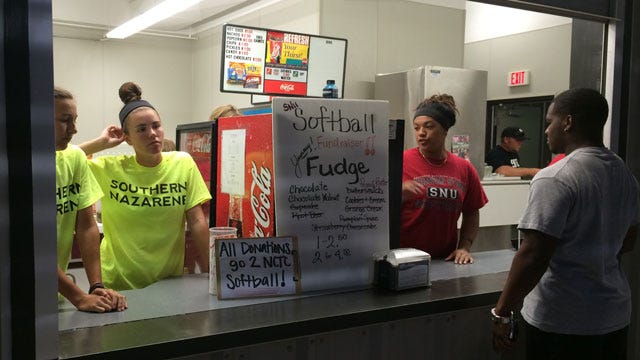 The softball community mourns the loss of four young women, killed in a head on crash in southern Oklahoma. The tragedy has touched the hearts of people not just in Gainesville, Texas but here in the Metro as well.

The North Central Texas College (NCTC) softball team was returning home after a scrimmage in Bethany against Southern Nazarene University (SNU) when a crash occurred on I-35.

Southern Nazarene University softball coach Tere Webber said this was the first time that North Central Texas College had come to their campus to play. Friday's matchup was just a scrimmage that SNU uses to recruit players for their team.

Just a few hours after the Lady Lions of North Central Texas College scrimmaged against the Southern Nazarene University softball team from 2 p.m. to 5:30 p.m., the Texas school's bus was in a deadly crash.

The Oklahoma Highway Patrol said around 9 p.m. near Turner Falls, an 18-wheeler headed north on I-35 crossed the median into the southbound lanes and crashed into the school's bus.

There were 16 passengers onboard, including the girl's coach, 48-year-old Van Hedrick, who was the driver.

All were taken to the hospital, but four players died.

Dr. Brent Wallace, the President of North Central Texas College said the accident is the most traumatic event in the school's 90-year history.

“I would like to offer my sincere condolences to these families, this is indeed a sad day for these families and for North Central Texas College,” he said.

The National Transportation Safety Board will be in Oklahoma for a week investigating.

"Our mission is to find out not only what happened, but why it happened so that we can prevent things, tragedies like this from happening again," said Robert Sumwalt of the National Transportation Safety Board.

In Bethany, Oklahoma the SNU Softball players are raising money for Texas school. They were collecting donations at the football game's concession stand.

“We just want NCTC to know that they're sisters in sport and in Christ we are holding them up, and will continue to pray for them as they heal and handle this very tough situation,” Webber said.

Webber said the girls came together and prayed at the university's chapel after hearing of the accident.

The investigation continues with both drivers taking standard toxicology tests.

Although most of the Texas team has been released from the hospital, Bailey Buchanan, 18, is listed in critical condition at OU Medical Center, and Rachel Hitt, 19, is still being treated at Norman Regional Hospital.