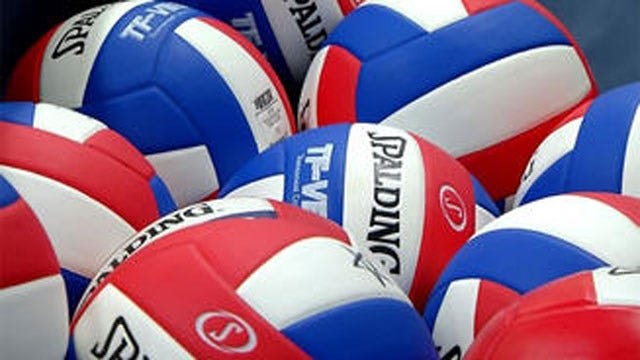 AMES, Iowa – Returning to the site of its last conference loss in 2013, the University of Oklahoma volleyball team came up short in a 3-1 loss to Iowa State at Hilton Coliseum on Sunday afternoon. The loss snapped an eight-match win streak in Big 12 contests for the Sooners, who dropped to 12-5 overall and 3-1 in league play.

ISU's Morgan Kuhrt led all players will 21 kills and added 11 digs for a double-double. Redshirt-sophomore outside hitter Madison Ward (Lawton, Okla.) led the way for OU with 17 kills on a .310 attack rate. She notched her team-leading sixth double-double of the season with a 12-dig effort.

Oklahoma returns home for a pair of home games next week, beginning at 7:00 pm on Wednesday, October 15 against Texas Tech. On Saturday, the Sooners play Baylor at 7:00 pm following the OU football game. Admission for that match is free.

- Ward has notched eight matches with 15 kills or more, including all four Big 12 matches.

- Doyle has recorded a double-double in all four Big 12 matches this season, has five overall on the year and 18 in her career.

The Golden Hurricane overcame a 2-1 deficit to win the final two sets, and pick up its second straight victory to improve to 10-7 overall and 2-4 in The American. Sophomore Brooke Berryhill tallied 20 digs, and senior Bailey Clampitt recorded 53 assists and 12 digs for TU.

Kadi Kullerkann recorded a match-high 22 kills, and Natalie Keck had 23 digs to lead Houston, which fell to 9-9 overall and 1-5 in The American.

“It's always nice to come back from down 2-1 to win,” Tulsa coach Ryan Wills said. “We played really well in the fourth set. We sided out at 66 percent and held them to 53 percent in the fifth set. If you do that in any set, you're in a good spot. Brooke Berryhill did really well in serve-receive, maybe the best she's done all year, and that really helped stabilize some things as we struggled through other parts of our game. We did a much better job offensively, and on defense, we did decent job in holding them to .142. More than anything, I'm really happy with the way we competed.”

The Golden Hurricane trailed 3-2 early in the fifth set, but scored consecutive points to take a 4-3 lead, and later broke a 6-6 tie with three straight points. Tulsa extended its lead to 13-8, then withstood a UH rally that cut it to 14-12, to win the final point and close out the match.

Tulsa used an 8-3 run at the end of the first set to break open a 16-13 lead to win 25-16. TU took the lead for good at 9-8 after a kill by El Houssine. The Hurricane hit .206 in the frame, tallied 19 digs and converted 11 of its 15 sideout opportunities, while holding the Cougars to a .049 attack percentage. El Houssine and Hooper each tallied five kills, and Berryhill added six digs.

The second frame featured 15 ties and five lead changes, as Houston hit .262 with 17 kills, while Tulsa hit .200 with 16 kills. The Hurricane led 19-17, before the Cougars scored four straight points to move ahead, 21-19. Following with three consecutive points, TU retook a 22-21 advantage. Houston then scored three straight, and the teams alternated points until a pair of UH kills ended the set, 29-27.

Houston scored the last six points of the third stanza to win 25-23. Tulsa took a 10-5 lead, and led 19-13, before the UH comeback. Bohannon tallied six kills in the set, while EL Houssine had four kills and four digs.

Tulsa came back to win the fourth set, 25-14. TU hit .429 with 14 kills and just two attack errors, while converting 80 percent (12-of-15) of it sideouts, and holding Houston to a .029 attack percentage. The score was only close at 3-2, just before the Hurricane scored four straight points. Leading 15-11, Tulsa used a trio of three-point runs to extend its lead to 23-13, on its way to scoring 10 of the final 13 points of the frame. El Houssine led TU with six kills and five digs to help Tulsa force the deciding set.

The Golden Hurricane is back in action Wednesday when it plays host to American Athletic Conference rival SMU at 7 p.m. at the Reynolds Center.

ORU Finishes Strong to Down NDSU 3-1

It was a three-headed attack for ORU (9-10, 3-3); with Sara Pope (20), Nika Mostahinic (15) and McKenna Qualls (13) all reaching double digits in kills. The trio accounted for 48 of ORU's 56 kills and all three set new career highs with their respective totals. Mostahinic and Qualls posted double-doubles after leading the defensive effort as well with 15 and 12 digs, respectively. Kylie Johnson also got it done on the back row with 11 digs.

In the second set, ORU fell behind 4-1 to start and trailed 7-4 before scoring the next seven points off the serve of Lucija Bojanjac to take an 11-7 lead. The Golden Eagles continued to pull away to win in dominant fashion, 25-13.

Oral Roberts: Sara Pope had 20 kills for the second time this season and the third time in her career, hitting .459 with just three errors for the match. Lucija Bojanjac had 47 assists and a pair of aces, accounting for two of ORU's eight total aces.

NDSU: Emily Miron had 12 kills and Emily Minnick added 10 for the NDSU attack. Emily Milligan led the way with 12 digs for the Bison.

- ORU had nine errors and eight kills in the first set, but rebounded to hit .370 as a team in the final three. Including the first set, ORU hit .293 for the match, while NDSU hit just .136 as a team.

- In addition to a team-high three service aces, which tied her career best, McKenna Qualls added a career high 13 kills.

It is back on the road for ORU as they travel to Omaha (Oct. 17) and Western Illinois (Oct. 19) for a pair of Summit League matches next weekend.