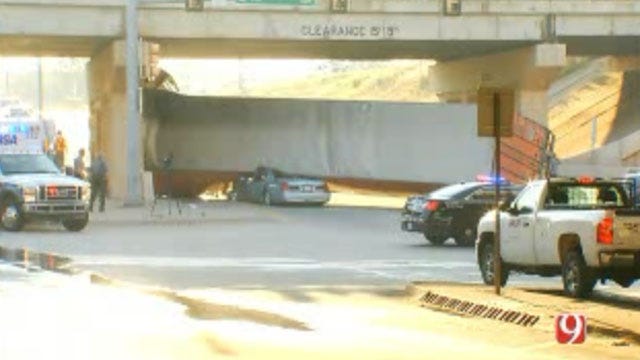 A semi-truck crash in northeast Oklahoma City caused traffic to back up in the area Wednesday morning.

According to authorities, at about 8 a.m., crews responded to a collision involving a semi-truck and a car under a bridge near N.E. 36th and N. Santa Fe.

Authorities told News 9 that the semi-truck driver was attempting to beat a red light, but ended up losing control of the truck while making a sharp turn. It then landed on top of a car.

Witnesses helped pull the driver of the car to safety.

First responders helped pull the driver of the semi out as well. They busted out a window and helped the man out with a ladder.

The two have been transported to the hospital, suffering from non-life-threatening injuries.

Traffic was backed up in the area. EMSA, Oklahoma City firefighters and police officers responded to the scene.

Authorities are also concerned that the accident may have caused damage to the bridge.