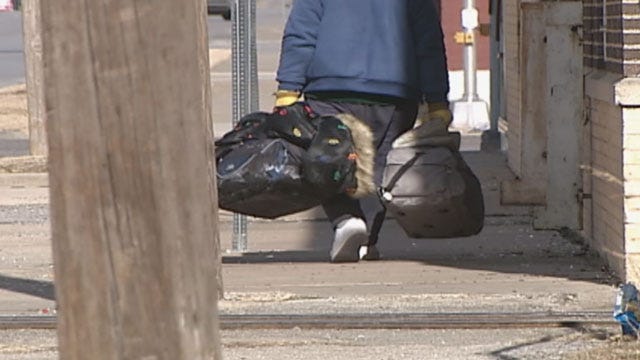 As America pauses to honor and salute our nation's veterans, one of the biggest challenges for many of our nation's heroes is homelessness.

Oklahoma City has been chosen to participate in a national campaign to end veteran homelessness and chronic homelessness in the next two years.

“Out here, I feel like an animal,” said Douglas Phillips. “I'm sleeping in dirt all the time,” he added.

Phillips has been a homeless veteran for 11 years.

“It's a whole new world because you've got to get adapted out here to make it,” Phillips told News 9.

The 61-year-old served in the U.S. Marine Corps and lost his home after a series of personal tragedies.

“I never thought in my world I would ever say I was homeless,” Phillips explained. “I've worked all my life, I've always had everything I wanted, until I come to Oklahoma and it seemed like the bottom just fell out of it,” he added.

Phillips is one of 78 homeless veterans in Oklahoma City who are either in a shelter or have no shelter at all.

A national campaign called 'Zero: 2016' aims to fix that.

Zero: 2016 is named after the federal goals outlined by President Obama to end veteran and chronic homelessness by Dec. 2016.

The Homeless Alliance and more than 40 other area nonprofits, private businesses and government agencies are working together to make it happen.

“It's not really that hard,” explained Dan Straughan of the Homeless Alliance. “If you ask a kindergartner what's the answer to homelessness - it's housing. You've got to get them into housing,” Straughan continued.

Straughan said once the housing is in place, then you provide the wrap-around services needed to sustain the housing, like mental healthcare, substance abuse treatment and job training.

“People are going to get better, faster if they are in their own home,” Straughan said.

Phillips said he is close to getting an apartment after the Homeless Alliance helped cut through some red tape.

“They keep giving me a handout, I need a hand up,” Phillips said. “Once you get me up there, I'll stay up there,” he explained.

Oklahoma City has already been chipping away at this goal.

A U.S. Department of Housing and Urban Development survey showed a 22 percent decrease in veteran homelessness since 2009 in Oklahoma City.

The goal of Zero: 2016 is to get to a "functional" zero, which means housing those who are currently homeless and having the capacity to rapidly re-house any new homeless as they appear in the community.

Tulsa and Norman were also selected to participate.