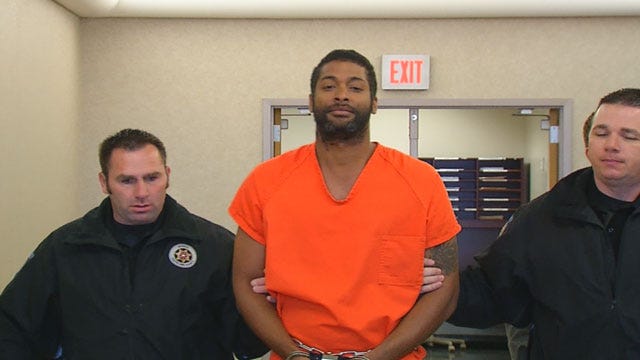 The man who held three people hostage this week inside a Norman office building is being held without bond. His post-traumatic stress disorder (PTSD) took center stage in his defense. Friday afternoon Devin Rogers went before a judge for the criminal side of his behavior, but because of his mental condition, four attorneys have volunteered to represent him free of charge.

“As a group I think we decided to do it, because the story is just so heartbreaking,” attorney David Smith said.

For the innocent people involved as well as the guilty, but in no way does Devin Rogers' PTSD diagnosis mean he is off the hook for what he did.

“This is absolutely a cry for help, and that's what you heard from Jennifer who was in the room with him,” attorney Sam Talley said.

Rogers got the help, albeit in an extreme way, and he is in solitary confinement and separated from other inmates at the Cleveland County jail. However, his attorneys said they are not sure for how long, and Cleveland County didn't return calls about the matter.

Given the circumstances and Rogers' state of mind, he is alone. It was a request he allegedly made to authorities during the hostage ordeal, but the root of his problems, his PTSD, his attorneys fear won't get the treatment necessary behind bars.

“The answer has typically been no for treatment providers to access inmates in the county jail outside the county jail programs that are presently in place,” Talley said.

But the programs are in no way geared at those who've been to war.

It has also come to light during the court appearance that the scars on Rogers' neck he claimed came from being a prisoner of war are from an attempted suicide, and it was just a fish story he told friends to hide what really happened.