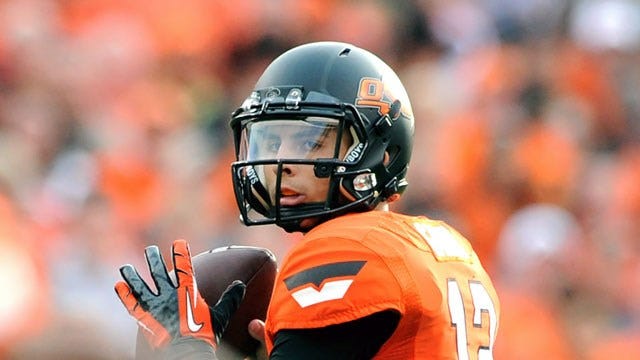 Oklahoma State quarterback Daxx Garman is battling concussion symptoms and has been unable to practice this week leaving the door open for true freshman Mason Rudolph to start against No. 7 Baylor on Saturday. The Tulsa World first reported Garman's injury.

The junior has caught a lot of flak for his inconsistency throwing the ball and lack of pocket-awareness. Garman has 12 touchdowns and 12 interceptions in eight games this season. He was sacked seven times in last Saturday's loss to Texas.

The Cowboys have tried to keep Rudolph's redshirt intact, but he's listed as the third-string quarterback on OSU's depth charts and the only other signal caller on the roster is walk-on freshman Taylor Cornelius.

Perhaps the Cowboys could run the option with Tyreek Hill as a wildcat quarterback. Surely it's too much to ask freshman corner Ramon Richards - a quarterback in high school - to play both sides of the ball.

Rudolph is a highly-touted passer out of Northwestern High in South Carolina. He was a consensus four-star prospect and rated as highly as the eighth-best pro-style quarterback in the high school ranks last year. But to burn his redshirt with two games remaining on OSU's schedule seems like a colossal waste when J.W. Walsh returns to assume the starting job again in 2015.

That may be the Cowboys' only option.