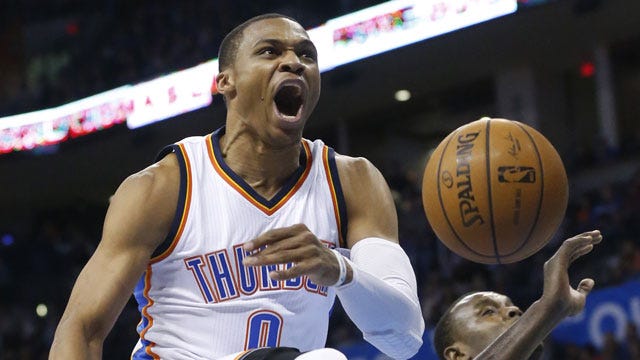 In case you had forgotten, Russell Westbrook is one of the most electrifying players in the NBA.

The impact of Westbrook's return Friday night was apparent from the very first possession for Oklahoma City. The Thunder—and the crowd—had tremendous energy and the Thunder rode that to a 105-78 win over the New York Knicks at The Peake.

Westbrook's fingerprints were all over the game on Friday. Westbrook assisted on the Thunder's first three baskets, and then scored his first points in a month on a massive baseline dunk. Oklahoma City cruised out to a 21-5 lead, sending the crowd into a frenzy and forcing former Thunder guard turned Knicks coach Derek Fisher to burn through two timeouts in the first few minutes of the game.

Westbrook departed in the first quarter after scoring 14 points and dishing out four assists in just eight minutes. He finished just shy of a triple-double, scoring 32 points with eight assists and seven rebounds. According to Elias Sports Bureau, Westbrook is the first player in the shot clock era with 32 points and eight assists in 24 or fewer minutes.

With the win, Oklahoma City has its first winning streak of the season and because of Friday's domination, the hole the Thunder has to climb out of to reach the playoffs doesn't look quite so daunting. The Knicks played without Carmelo Anthony on Friday, so the Knicks were far from full strength, but it was impossible to ignore the improvements for the Thunder by simply adding Westbrook to the lineup.

OKC scored 30 points in the first quarter and 59 in the first half, the best half for the Thunder this year. The Thunder shot 44 percent, 10-of-24 from 3-point range and crushed the Knicks on the glass, 57-33 with 18 offensive rebounds.

Everyone contributed as well. Serge Ibaka had 14 points, all in the first half. Jeremy Lamb had another excellent game, scoring 13 points. Reggie Jackson had 10 points off the bench and Kendrick Perkins and Anthony Morrow both chipped in eight. Steven Adams grabbed a career-high 13 rebounds.

Grant Jerrett made his NBA debut late in the fourth quarter and managed to chuck up five 3-pointers in nine minutes of action. He got one to go down for his first NBA points.

Amar'e Stoudemire had 20 points off the bench for New York, which shot just 38.7 percent.

There's a lot of basketball yet to be played and the Thunder still has a long way to go to get back in playoff contention. But the Thunder hasn't played a single game this season with Kevin Durant, who could join the team as soon as next week. Things aren't back to normal just yet, but the taste of normalcy Russell Westbrook gave Thunder fans on Friday night tasted so good.