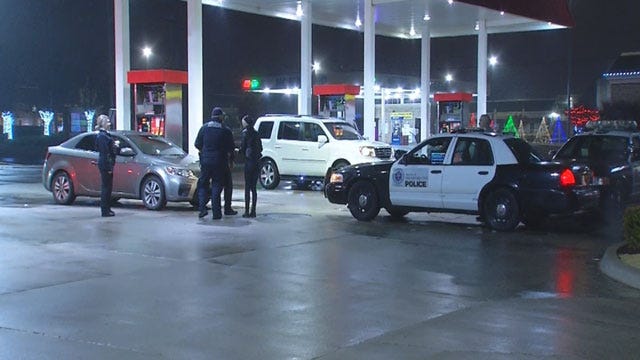 Oklahoma City police have arrested the suspects believed to be responsible for three robberies Thursday morning. During one of those robberies, police said two suspects dressed up as Batman and Captain America.

According to police, just after 5 a.m. officers responded to the report of an armed robbery at the 7-Eleven near Penn. and S.W. 104th. A woman was filling up the tank of her silver car when three suspects drove up in a blue Dodge pickup, and demanded money and her purse.

Police said the woman was pistol-whipped. A witness scared off those suspects and they took off without her cash or purse. The victim then went to the 7-Eleven for help and was able to tell police more about those suspects.

Here's what's unusual. One officer told News 9 that two of the suspects were dressed as Batman and Captain America. There's no description on the third suspect other than it was a woman.

The victim left in her own car after EMSA treated her for a cut on her head.

Police told News 9 at about 11 a.m. that they are also investigating an armed robbery at a gas station at N.W. 45th and Classen. The suspect vehicle description matches the "Super Hero" bandits' vehicle Thursday morning.

At about 11:30 a.m., police confirmed with News 9 that they have arrested the suspects at a 7-Eleven at 71st and Western.  The suspects may have robbed another woman at an apartment complex at 5741 N. Classen before being arrested, according to police.

Reporter Adrianna Iwasinski is following this story. Stay with us for updates.