OKC Couple Says Thief Took All Of Their Belongings 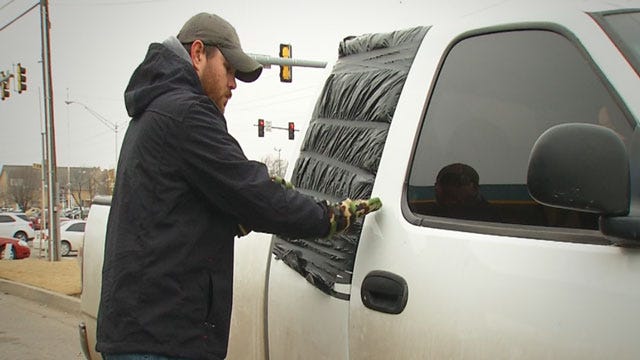 A metro man and his fiance said they're in dire straits after thieves broke into their pickup truck early Wednesday.

Justin McPherson said he and his fiance Maria DeCarr had been living in the truck for the past two months, after a string of landscaping and clerk jobs McPherson had been working dried up.

McPherson said the couple stayed with friends at Pickwick Place Apartments Tuesday night because it was so cold.

On Wednesday, they realized someone had bashed in a rear window of McPherson's truck. They said it was parked in Pickwick Place's parking lot and basically everything they owned was stolen.

“I just need these people who did this to understand what they did was wrong,” said McPherson. “And they did it to good people, that didn't deserve this.”

McPherson said he filed a police report. Also, News 9 placed a call to the OKC Homeless Alliance on the couple's behalf.

If you want to help them, email  News 9's Steve Shaw your name and number at Steve.Shaw@News9.net.

OKC Couple Says Thief Took All Of Their Belongings