Heads Above Water: Durant Leads Thunder Back To .500 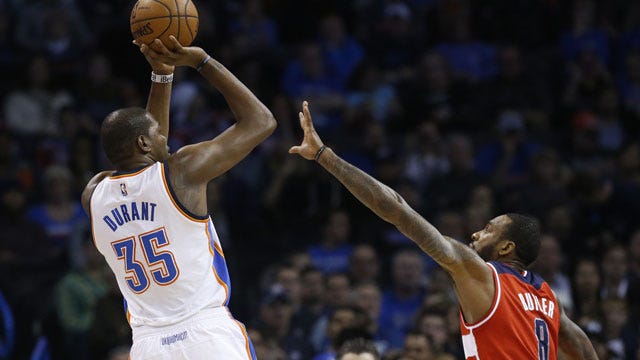 Kevin Durant continued his torrid stretch by scoring 34 points as the Thunder took down Washington, 109-102 at The Peake, evening their record to 17-17 for the season.

Going back to the Golden State game on Dec. 18—when Durant sprained his ankle late in the first half—Durant is 35-of-54 from the field and has scored 108 points, all in the span of just 10 quarters. To put those incredible numbers in perspective, Durant has missed 19 shots in 10 quarters. Teammate Russell Westbrook missed 15 shots on Friday night alone, going 8-of-23 from the field for 22 points.

Durant's presence obviously lifts the Thunder to the level everyone expected OKC to play at all season. Friday night, Durant had several quintessential MVP moments, burying back-to-back pull-up 3-pointers at the end of the third quarter to tie the score at 82; rattling off five straight big points in the fourth quarter after the Wizards had tied it at 95; finishing a ridiculous and-one opportunity off a lob from Westbrook to put the Thunder up 105-97 with 1:42 left.

While Durant put on a sensational performance, it was the production of those around him that assured Oklahoma City came out with its fourth victory in the last five games.

Late in the fourth quarter, with OKC clinging to a 105-102 lead, it was Westbrook who stole a bad pass from John Wall. Westbrook missed a contested layup, but Serge Ibaka hustled after Westbrook and got the offensive rebound and finished the play, putting the Thunder up 107-102 with 22 seconds left.

But OKC wouldn't have been in position to win without the first half performance of the bench.

The Thunder was struggling to get anything going offensively in the first quarter, as Durant and Westbrook took 11 of the first 13 shots for OKC and the Thunder trailed by six. Enter the bench unit of Nick Collison, Perry Jones, Kendrick Perkins, Reggie Jackson and Anthony Morrow. The fivesome proceeded to turn the deficit into a 36-32 lead with 9:10 to play in the second quarter.

Collison in particular was effective, after not having a major impact on a game since the Thunder's loss to Portland on Dec. 23. Putting himself in position to receive passes for easy baskets, Collison scored 10 points and grabbed three rebounds in 11 first half minutes, leading the bench unit to 26 points in the first half and 40 points for the game.

Bradley Beal led the Wizards with 21 points and also grabbed a game-high 10 rebounds. Beal was one of six Washington players to score in double figures. Andre Miller, long a thorn in the Thunder's side, scored 15 points off the bench, 13 of those in the first half.

Phoenix and New Orleans both won on Friday, leaving the Thunder still 1.5 games out of eighth place in the Western Conference with 48 games still to play. Oklahoma City is playing well, taking care of business when it has a full roster. But January is not going to be a kind month for the Thunder. The rest of the month includes 10 road games in 13 games, including two games against Golden State (one home, one away) and road trips to Houston, Miami, Washington, Atlanta and Memphis.

OKC has made it back to .500, but it's still a long way from assuring itself a playoff berth. This month could make or break the Thunder's hopes, but with a healthy roster including the reigning MVP, it doesn't look quite so daunting.

Heads Above Water: Durant Leads Thunder Back To .500