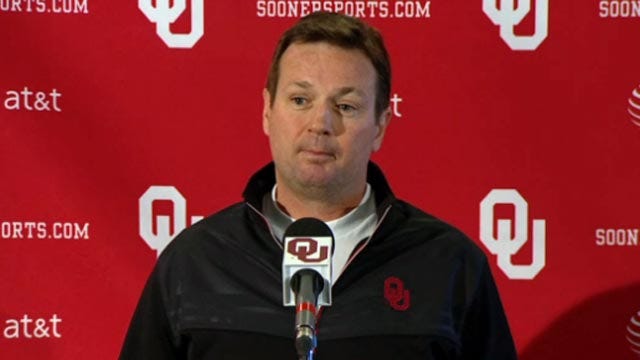 Oklahoma football coach Bob Stoops held his end of the season press conference Tuesday morning, clarifying a lot of the rumors that had been flying around the program since the end of a disappointing 2014 season.

Here are some notes and observations from the press conference.

-Stoops added he is, "more determined than ever to get Oklahoma back to competing for national championships. I promise I'm as dedicated as I have ever been." Consistently, Stoops put himself in the crosshairs of blame for why the season went as poorly as it did.

-Stoops confirmed Josh Heupel and Jay Norvell will not return to the coaching staff next year. Stoops added they are not scapegoats, nor were they responsible for the way the season went. “We need to go in a different direction,” Stoops said.

-Stoops said there were a lot of sleepless nights over the past week or so in regards to coming to a decision on dismissing Heupel and Norvell.

-Stoops wouldn't say what direction he wanted to go with the offense or with an offensive coordinator to avoid putting any unnecessary expectations on his new hire. Stoops did say he simply wants to hire someone to run their system, not something OU already has in place.

-When asked if running backs coach Cale Gundy would be a candidate for the offensive coordinator position, Stoops said Gundy would be one in the future, but not at this time.

-Stoops said at this point, there won't be any other staff changes are coming. That's a very interesting statement, given that the defensive staff seemed to be the most vulnerable to losing their jobs. Stoops said the fact OU returns nine starters on defense was a considerable factor in evaluating whether or not to dismiss defensive coaches.

-Defensive line coach Jerry Montgomery has been promoted to co-defensive coordinator. Stoops called him a rising star in the coaching profession.

-Stoops said Mike Stoops' status hasn't changed with OU and he expects Mike to be with the Sooners in 2015. Stoops said he doesn't anticipate making any schematic changes to the defense going forward, again citing the fact OU will return nine starters next season.

-Dorial Green-Beckham will enter the NFL Draft. Stoops said DGB informed him about a week ago. While he never saw the field for OU, DGB contributed to the Sooners in a positive way.

-Stoops said the quarterback position would be an open competition in the spring and said the staff will look at recruiting a quarterback for the 2015 class.

-Stoops also said Frank Shannon and Joe Mixon are expected to be back after suspensions this year. Stoops also confirmed tight end Taylor McNamara and running back David Smith will transfer.