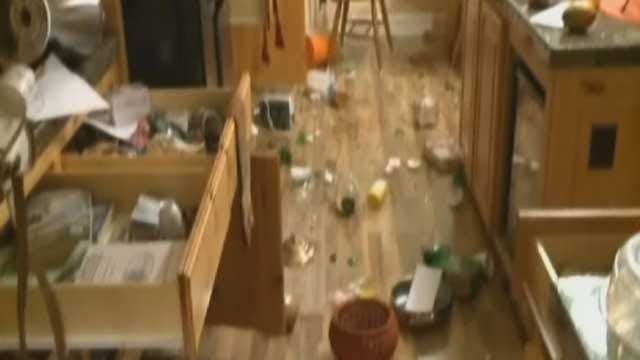 Oklahoma had more earthquakes in 2014 than in the past 35 years.

The U.S. Geological Survey said the state had five times as many earthquakes last year than in 2013.

Oklahoma is now the most seismically active state in the lower 48 states. Also, there are now just as many Oklahomans with earthquake insurance as Californians.

Rachel O'Donnell and her family have gotten used to the quakes and shakes in Guthrie.

“We feel them all the time,” O'Donnell said. “We felt two this morning and in fact, the kids are like, ‘Oh, another earthquake,'” she added.

During a 3.7 magnitude earthquake Sunday, January 4, a large picture fell off the mantel and shattered. O'Donnell has also noticed more hairline cracks with each earthquake.

“It's knocking over jars in my pantry, it's knocking stuff off the walls, all of the pictures are crooked,” she explained.

O'Donnell and her family now have earthquake insurance, but they have to pay $8,000 out of pocket before the coverage kicks in.

The Oklahoma Insurance Commissioner explained that is pretty standard because earthquake insurance is not really for the small stuff.

“It's basically sleep insurance, it's what if the big one hits, what if that is in my backyard,” said John Doak, Oklahoma Insurance Commissioner.

Commissioner Doak said you hope you never have to use earthquake insurance, but some homeowners did when a huge quake struck in Lincoln County and the houses were total losses.

“We know that probably for the cost, it is a good financial protection,” Doak told News 9.

Two percent of Oklahomans had earthquake coverage before 2011. That has increased to somewhere between 10-15 percent.

“It's going to be if a window breaks, we are going to end up paying for it on our own, but if it's some huge foundation issues, that's what we basically got it for,” O'Donnell said.

The U.S. Geological Survey says Oklahoma had 567 earthquakes with magnitudes of 3.0 or greater last year.