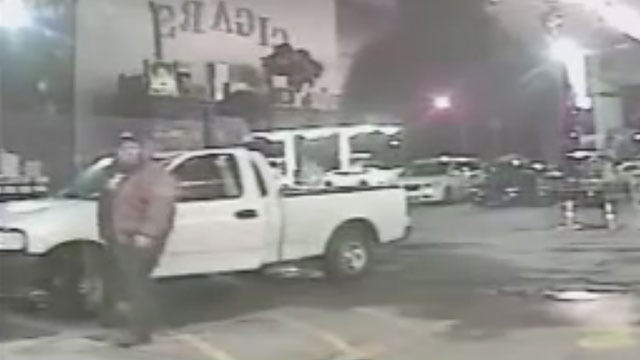 A thief pulled off a brazen heist in broad daylight, but he left behind a big clue.

He didn't realize he was pulling off the crime right in front of security cameras outside of a pawn shop in Moore.

It was some pretty good video. First, the guy walked up to the store to check things out. Then, he pulled his pick-up to the front and loaded up an $800 air compressor like it was no big deal.

“Compressor was right here, and he just walked it straight over there,” said Pam Barnes.

Pam Barnes, the owner of Cash Now Pawn, said the guy was bold.

“This is what all the big boys use, and he has something that's cutting right through it like it's butter,” said Barnes, holding up the rubber chain.

“He had his truck parked there. He came from over here and parked right here,” said Barnes.

After scoping out exactly what he was about to take, Pam said the thief went and got his late model white Ford F-150, then parked it right in front of the store.

He then sat in the truck for several minutes, before making a move.

“He got out, ran over here, picked it up, and this is a big boy,” said Barnes. “He picked this heavy 300-pound machine up and just set it in the back of his pickup truck!”

Pam knew for sure she caught it on video because the compressor was sitting right under her only surveillance camera.

“It did not catch it because the light was out,” said Barnes.

“We've got two systems kind of running to kind of back us up,” said Phillip Scaffetta.

So Pam called Phillip Scaffetta at Party Moore next door.

“We caught him with actually two cameras,” said Scaffetta.

Phillip has eight that surround his store, and that does not include his cousin's cameras next door at Moore Liquor.

The family has been able to catch a number of criminals using a pretty advanced security system.

“We know there was someone else involved. We could never get an identification or a visual on that person,” said Scaffetta.

“You have to be more careful and you have to pay attention. And when you don't, they'll get you,” said Barnes.

Pam said she is in the process of installing a new surveillance system of her own.

If you recognize the man in the surveillance video, call police.