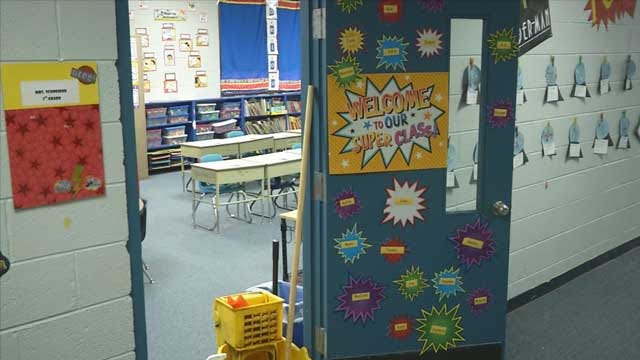 A record number of students in Minco were home sick last week, which prompted school officials to call off classes Monday and Tuesday. That had school officials and cleaning crews working extra hard, with the hope that this doesn't happen again.

Classrooms were getting a good scrub down following dozens of students after winter break falling ill from strep and the flu. District officials said they are hoping to wipe out that virus so students can return to school later this week.

Superintendent Kevin Sims said he made the decision after a recent spike in flu and strep related absences.

“It's been unbelievable. I've never seen this much before,” said Sims.

Of the 286 elementary school kids, 30 were out sick Friday. And that number jumped to more than 50 by Sunday night.

“Over the weekend I received numerous phone calls, Facebook messages, text messages, that their children were sick. My own daughter was diagnosed with the flu and strep throat. We have several diagnosed with both,” the superintendent said.

Sims said he hopes the deep clean throughout all three school will stop the viruses from spreading further.

“We received a lot of compliments on this decision. It was a hard thought decision, you never want to miss school, but at this point we gotta make sure we are well and well enough to get to school and we are taking the steps to prevent the spread of the flu,” said Sims.

School officials said the plan as of Monday was for students to return to school Wednesday.

District officials said they will use 'bad weather days' to make up the two days of school students missed.