Jayhawks Too Much For Cowboys In Foul-Filled Tilt 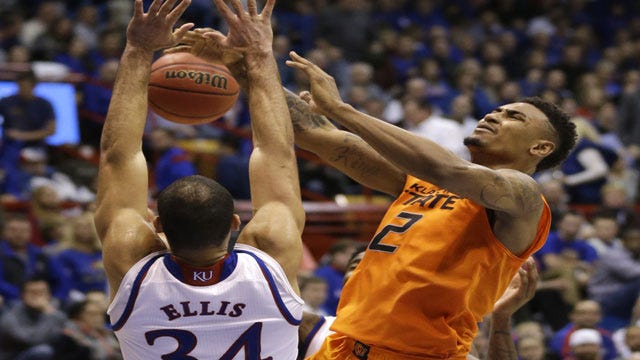 The newly-ranked Oklahoma State Cowboys gave it a good shot on Tuesday night, but Kansas, once again, found a way.

The game was played at a snail's pace, mostly thanks to multiple reviews, a first-half scuffle, and a whopping 49 fouls assessed. OSU stuck around thanks to its 22-of-25 (88 percent) from the line, which is normally a boatload of free throws.

But Kansas took the cake. The Jayhawks shot just 69.6 percent from the stripe, but attempted an incredible 46 attempts.

Frank Mason III led Kansas with 16 points and nine rebounds. Mason shot 9-of-11 from the line. Kelly Oubre Jr. added 14 points and six boards and shot 7-of-12 from the line. No other Jayhawk reached double figures.

Phil Forte somehow managed to score 18 despite limping around the court for most of the game with an apparent hamstring injury. While Nash and Forte combined for 39 points, the rest of OSU's roster managed a total of 18. That included just three bench points, all from freshman Tyree Griffin.

Jayhawks Too Much For Cowboys In Foul-Filled Tilt