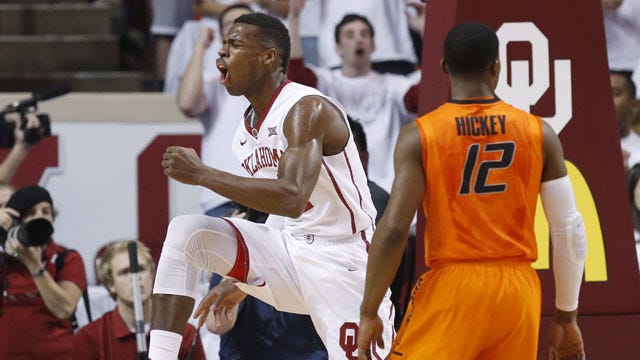 Oklahoma really needed a win on Saturday. A week prior, the Sooners had been dealt a shocking overtime loss by Kansas State, and followed that up with a blowout loss at West Virginia on Tuesday.

Bedlam in Norman provided the proper motivation and opportunity for the Sooners to right the ship, and Oklahoma took advantage, crushing Oklahoma State, 82-65.

That OU held the Cowboys to 65 points and 37.3 percent shooting, along with forcing 15 turnovers, wasn't necessarily a surprise. What was surprising was the fact the Sooners put on their best offensive showing in a very long time.

But that changed Saturday. Oklahoma displayed terrific ball movement which led to a lot of easy shots, a big reason why the Sooners shot 56 percent from the field for the game. Most encouraging was the balance and contributions from all over the floor.

Four starters scored in double figures and two more players scored seven points each. Buddy Hield, who has been sensational in Norman this season, put on a show, scoring 27 points on a perfect shooting performance. He was 10-for-10 from the field, 4-for-4 from 3-point range. The only blemish for Hield was two missed free throws.

After some early-season shooting struggles, Hield has been very efficient from the field in the last month, shooting under 40 percent just once after failing to hit 40 percent six times in the first eight games of the season.

Jordan Woodard scored 13 points, Ryan Spangler had a double-double of 11 points and 11 rebounds and TaShawn Thomas had 10 points, all in the second half. Dinjiyl Walker and Isaiah Cousins each scored seven points.

The balance was very important on Saturday, but achieving it again will be more important on Monday night, when the Sooners travel to Allen Fieldhouse to take on Kansas. At their best, the Sooners can play with anyone, but the key is reaching that level.

Offensive balance is a big part of that, as well as key contributions from the bench. Walker led the unit with seven points, but even though the group had just 14 points between them, their biggest contributions came by playing great defense and generally sustaining the momentum the starters gained right out of the gate.

Oklahoma also got great minutes from Frank Booker, who has had a hard time working his way back from a back injury last month. Booker played 15 minutes and had four points, three rebounds and three assists. OU coach Lon Kruger called it his best stretch of minutes all season. The Sooner will need much more of that going forward.

Oklahoma played a nearly perfect game on both ends of the floor—if you ignore the 17 turnovers the Sooners committed. Oklahoma had 22 turnovers in the loss to West Virginia Tuesday night, which helped the Mountaineers roll over the Sooners.

The biggest issue for Oklahoma this season has been an inability to handle a full court press or pressure defense in the halfcourt very well. Late in the first half, Oklahoma State turned up the defensive pressure and saw a lot of success as a result. OSU collected 11 steals for the game, most of those as a result of the press.

The Sooners' struggles have given opponents a solid blueprint for how to throw Oklahoma off their game. It might have helped the Cowboys more on Saturday if they could have made a shot. But if the Sooners want to continue to contend for a Big 12 title and make noise in March, this is a problem they'll have to correct.

Oklahoma won't have much time to correct that problem thanks to Monday's trip to Kansas. But the daunting task of playing at Allen Fieldhouse comes at a good time for the Sooners. Saturday was one of the best performances of the season for OU, and trying to focus on playing the Jayhawks is never an issue.

The Sooners haven't won in Lawrence in over 20 years. With Kansas a bit down compared to past years and Oklahoma playing with its best team in years, it's a great opportunity to get a big monkey off the OU program's back.

It will take another performance like Saturday's to beat Kansas, but the win over the Cowboys was a reminder of how good the Sooners can be when they play to their potential, especially on the offensive end.