Thunder Turns Down Heat, Moves Above .500 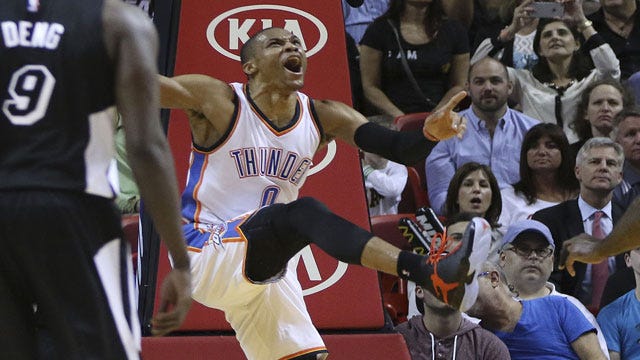 The state of the Thunder is strong.

Thanks to a 94-86 win in Miami on Tuesday night, Oklahoma City is finally above the .500 mark for the first time all season.

It definitely wasn't easy though, as Miami got hot early. Hassan Whiteside's 10 first-quarter points helped the Heat build an 18-10 lead. OKC used an 8-0 run late in the first to knot things up, and it was back and forth for the rest of the half. The Heat took a one-point lead into the locker room but it was all Thunder in the second half.

The only Thunder players who seemed to find the range were Reggie Jackson and Anthony Morrow. Jackson poured in 16 points on 7-of-9 shooting and Morrow dropped 12 on 5-of-9 from the floor.

“We didn't give up any easy or open shots. I thought the guys did a great job of just staying with what we do defensively,” Thunder coach Scott Brooks said. “We didn't make a lot of shots but we did a lot of good things.”

Miami actually shot it well, but the suffocating Thunder defense forced the Heat into 19 turnovers. Oklahoma City was able to hoist up 24 more shots than Miami thanks to the Heat's sloppy play. Dwyane Wade led Miami with 18 points while Chris Bosh added 16. Whiteside finished with 10 after leaving the game with a sprained ankle.

“They did a good job of taking our punches and throwing them back,” Durant said. “We weren't shooting the ball well at all but I think defensively we played pretty good, especially down the stretch.”

After scoring 127 points in each of their past two wins, the Thunder proved that they can win a much different game in Miami. Durant praised his teammates for their resiliency.

“We can win in different types of ways,” Durant said. “Shots weren't falling, and it's easy for everyone to be excited and positive when you're playing well but we were struggling on offense but we stayed with it, stayed together.”

OKC (21-20) is now officially halfway through the season. The Thunder sits three games behind the Suns for the No. 8 playoff spot in the West and plays at Washington on Wednesday night.

Thunder Turns Down Heat, Moves Above .500