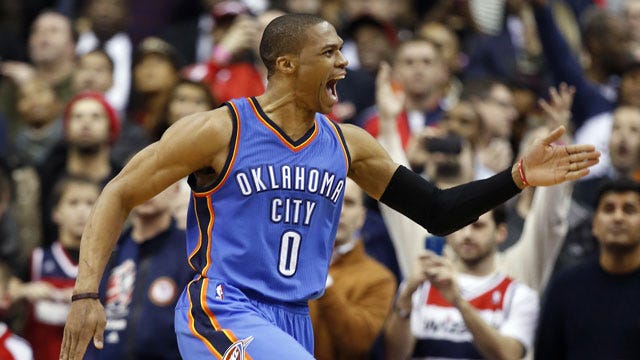 Oklahoma City has become somewhat famous for its terrible end-of-game plays that normally result in deep, forced 3-pointers. Wednesday night, the Thunder finally got a decent look in crunchtime and wouldn't you know it, something good happened as a result.

Russell Westbrook's layup with 0.8 seconds left lifted the Thunder to a 105-103 overtime win over the Washington Wizards.

John Wall's desperation 3-pointer at the buzzer was way off, and the Thunder continued its East Coast road trip with its fourth win in a row and fifth in the last six games.

In Westbrook's own words, the final play was simply good execution. The play was clearly intended to go to Kevin Durant, but Washington's Nene switched and did a good job of shutting that option off. With the play breaking down, Westbrook, who was near midcourt, simply took off for the rim, getting the pass from Anthony Morrow at a sprint and went all the way to the rim for an uncontested layup.

Westbrook finished with 32 points, eight rebounds and eight assists, while Durant had 34 points. Anthony Morrow was the only other player in double figures with 10, but Steven Adams had a monster night on the glass, pulling down a career-high 20 rebounds.

Nene led Washington with 24 points and Wall had 18. Paul Pierce and Bradley Beal had 14 points for the Wizards, which shot just 38 percent from the field.

It was incredibly refreshing to see a clean, easy look in crunchtime for OKC, even if there was a certain level of improvisation needed in order to get the shot. At the end of regulation, the Thunder opted for the usual, a deep Durant 3-pointer that was short and wide of its intended target.

More importantly, it led to another win, this one coming against one of the best teams in the Eastern Conference on the second night of a back-to-back. OKC has dispatched Orlando, Miami and now Washington on this East Coast swing, and will face the red-hot Atlanta Hawks, winners of 14 straight, on Friday night before taking on Cleveland and LeBron James on Sunday.

Wednesday's win was anything but pretty. Oklahoma City trailed for much of the game and shot just 39 percent from the field. In fact, the Thunder scored more points in the five-minute overtime period (13) than they did in the entire second quarter (12).

No one was immune from the shooting struggles, so the Thunder had to rely on their stars to lead them to victory. OKC trailed at the half, 50-38, with Durant and Westbrook combining for 20 of those points. OKC began to figure things out offensively in the third quarter, cutting the deficit to just four at the end of the period, thanks to Westbrook's 16 points in the quarter.

Dion Waiters' layup with just over nine minutes remaining gave the Thunder a 75-74 lead, their first since early in the first quarter. Thanks to Durant and a better flow on offense, the Thunder was able to open up an 87-80 lead before the Wizards charged back.

The young guns were the stars, but Pierce turned back the clock for Washington, hitting two big 3-pointers that gave Washington a two-point lead on two occasions before OKC rallied to tie and force overtime.

The overtime period was about Durant, as he posterized Marcin Gortat with a filthy dunk to tie the score at 98, and then later in the period buried a deep 3-pointer late in the shot clock to give OKC a 103-101 lead with 35 seconds remaining.

There was plenty of talk on Wednesday about Durant playing in his hometown and the possibility of him returning when he is a free agent in 2016, but on the court, Durant was all about doing everything he could to lead his current team to a win.

Phoenix was able to defeat Portland on Wednesday, so the Thunder still sits three games behind Phoenix for the eighth spot in the Western Conference. But the Suns are in the midst of a difficult stretch themselves and with OKC playing well, the next week is a big opportunity for the Thunder to gain ground.

Oklahoma City pulled off a win in Washington because it went against the common trend in crunchtime. Perhaps avoiding more bad habits will help the Thunder continue its recent run of success.