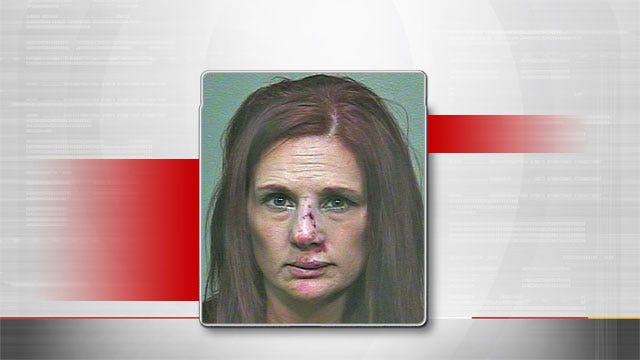 A woman was arrested on suspicion of driving under the influence of drugs after police said her teenage daughter, who was a passenger in the car, called 911 to report the incident.

According to police, at about 7:20 p.m. Wednesday, officers responded to the report of an impaired driver in the area of May and Memorial. The driver's daughter, who is about 15 years old, called police to report that her mother had lost consciousness while driving.

Police said another person also called to report a white Cadillac that had struck a curb and was driving erratically in the area.

Officers arrived and pulled over a vehicle matching the description going westbound on Memorial in the 3400 block. Police said the car was going about 15 MPH and it was swerving within the lane. The car had a flat tire and was being driven on a rim.

Officers then spoke with the driver, 38-year-old Bridgette Lynn Wallace. Police said Wallace's nose appeared to be scraped and swollen. Wallace said that's because she had fallen and hit her face on the curb.

According to police, Wallace did not know where she was or what time it was. She had a very slow speech.

Wallace told officers that she had not been drinking, but she had taken prescription pills before getting behind the wheel. When officers asked Wallace to step out of the vehicle, police said Wallace was very unsteady on her feet and she nearly fell.

Wallace's teenage daughter told police she called 911 because she was scared. The girl and Wallace's two other children, who are about 6 years old, were found inside the vehicle. They were released to their father.

Wallace was transported to Mercy Hospital. After being medically cleared, she was arrested and booked into the Oklahoma County Jail on complaints of driving under the influence of drugs and child endangerment.