Volunteers Teach Elementary Students How To Tie A Tie 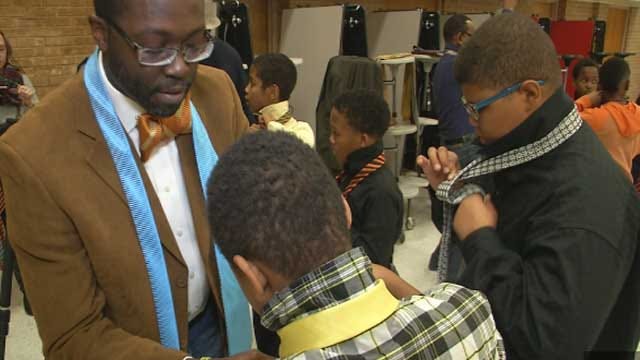 It's an important lesson all men learn at one point in their life, the art of tying a tie. On Thursday, thanks to dozens of volunteers, the boys at FD Moon got their first lesson.

Men of all professions donated their time passing on their tie-tying skill, once taught to them by a mentor or family member.

The boys practiced on ties donated for the event.

“We had many people come in and just taking ties off their neck, just dropping ties off saying 'hey I heard you need a tie',” said FD Moon Principal Warren Pete.

It took the boys a couple of tries before mastering the basic knot.

“I had a clip on tie, but it broke. So I got me a tie that can tie and I'm just trying to figure out how to tie it,” said fifth grader Drayden Calip.

He's excited he can now teach his friends.

“Now since I've learned I can probably teach other people in my neighborhood how to tie a tie,” said Calip

Students not only learned how to tie a tie, but the importance of looking professional and looking the part.

“It opens up a lot of doors. I told them how people perceive you, how you look, how you dress makes an impression,” said Pete.

And first impressions will be especially important for students like Drayden, who hopes to be a lawyer.

“Most people that have ties, that's professional. And it makes it look nice when you wear a tie. More people give you respect,” said Calip.

Rather than having casual Friday at the school, the boys at FD Moon will have "dress up Friday" wearing a dress shirt and showing off their new ties and skills.

All the ties donated for Thursday's event the boys were able to keep.

The plan now is for the older kids to teach the younger students how to tie a tie.

Volunteers Teach Elementary Students How To Tie A Tie