Miss Me Yet? Lance Thomas Leads Hapless Knicks Past Thunder 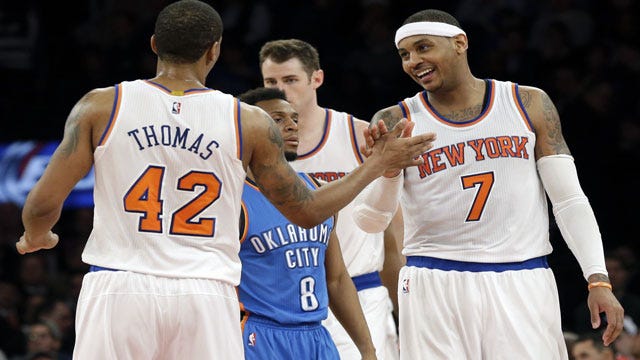 Lance Thomas played heavy minutes for the banged-up Thunder earlier this season, providing excellent energy and effort to help Oklahoma City keep its head above water. But after the cavalry rode back from the infirmary, the Thunder parted ways with Thomas.

On Wednesday night in New York City, Thomas made them pay.

Thomas poured in a season-high 17 points and grabbed five rebounds to lead the Knicks past Oklahoma City 100-92 in the Thunder's most embarrassing loss of the season.

New York (9-37) got 31 points and 10 rebounds from Carmelo Anthony and 18 points from Langston Galloway; one of three Knicks playing on 10-day contracts.

This thing was back-and-forth for most of the game, but the Thunder got caught napping midway through the fourth quarter. New York, holding on to an 82-80 lead, took off on a 12-3 run to essentially seal the game.

Oklahoma City played without Kevin Durant, who missed his second straight game with a toe injury. Russell Westbrook tried to pick up the slack by tying his season high with 40 points, but he got virtually no help from his fellow starters.

Serge Ibaka scored 10 to go with 10 boards, but shot just 3-of-9. Steven Adams managed just six points in 30 minutes, and perhaps the most incredible stat of the night, Andre Roberson and Perry Jones combined to play 39 minutes and failed to score a single point.

OKC did get a boost from the bench. Reggie Jackson scored 13, Anthony Morrow scored nine and Dion Waiters added eight. But the energy just wasn't there yet again.

“I thought they outworked us throughout the game,” Thunder coach Scott Brooks said. “That enabled them to have a hot fourth quarter. We have to do a better job of playing the entire game.”

Knicks' coach Derek Fisher earned his first win against his former club. Fisher joined the Thunder in a reserve role for parts of the past three seasons.

OKC falls right back to the .500 mark at 23-23. The Thunder has lost three of four and still sits in the No. 10 spot in the Western Conference.

Miss Me Yet? Lance Thomas Leads Hapless Knicks Past Thunder