Sooners Rally In Second Half To Sweep Bedlam 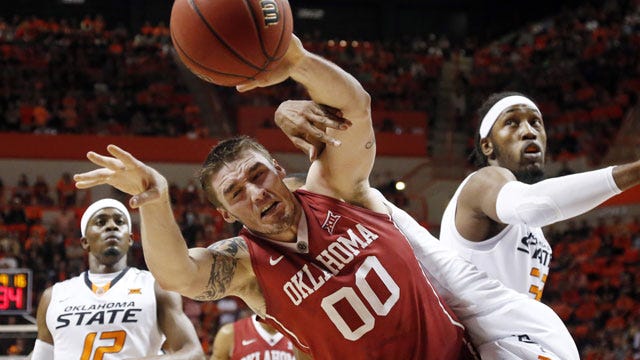 Saturday's second leg of Bedlam in Stillwater was a game Oklahoma and Oklahoma State desperately needed. The Sooners had lost four of five before defeating Texas Tech on Wednesday, and the Cowboys were trying to build momentum from Tuesday's home win over Baylor.

When the dust settled, it was the Sooners grabbing the important win, as Oklahoma outlasted the Cowboys, 64-56 at a raucous Gallagher-Iba Arena.

Jordan Woodard came up big for the Sooners Saturday night, scoring a game-high 17 points and hitting 3-of-5 from 3-point range. Both were season-highs for the OU point guard, who was also very active defensively with five steals.

Buddy Hield had 15 points, 12 of those in the first 10 minutes of the second half that changed the game in favor of the Sooners. Ryan Spangler had 13 points and TaShawn Thomas had 12.

For the Cowboys, Phil Forte had 15 points, but just four of those came after halftime as he was unable to get free for open shots. Forte took just three 3-pointers and hit one of them. Le'Bryan Nash had 12 points, but picked up two fouls in the first five minutes of the game and sat for the remainder of the first half, limiting his overall effectiveness.

Anthony Hickey was the only other player in double figures with 10, but like Forte, he struggled in the second half, scoring two points on 1-of-6 shooting.

The Cowboys came out with a ton of energy, feeding off the big crowd and harassing Oklahoma on the defensive end. The energy led to a 9-2 lead that turned into a 22-10 advantage halfway through the first half. The Sooners eventually settled down, thanks to the steady play of Woodard and Spangler, and went into the locker room trailing by just seven points, 32-25.

In the second half, it was Oklahoma that came out with more energy. The Sooners quickly erased the Cowboys' seven-point lead, taking a 40-38 lead with 14:39 to play on Hield's 3-pointer.

Foul trouble became an issue for the Cowboys in the second half, as Michael Cobbins picked up his fourth foul with 13 minutes remaining. Without his presence in the paint, OU was consistently able to get to the rim and the foul line, extending its lead to 50-45 with 10 minutes to go.

The offense disappeared for both teams at that point, but especially for the Cowboys, who went nearly eight minutes with just three field goals. OSU did cut the OU lead to 50-48, but OU regained control with free throws to grab a 56-48 lead with 3:52 left.

OSU battled back, turning up the defensive pressure on the Sooners and forcing multiple turnovers and missed shots. The Cowboys got as close as 58-54 with two minutes left, but were unable to get any closer, as the Sooners closed it out at the free throw line.

Oklahoma takes on West Virginia at 7 p.m. Tuesday night in Norman, while the Cowboys are in Austin on Wednesday to take on Texas at 7 p.m.

Sooners Rally In Second Half To Sweep Bedlam