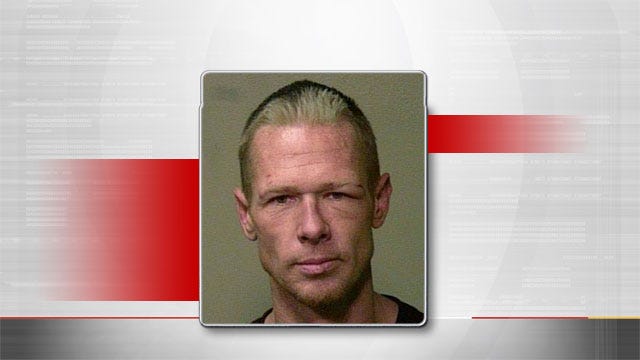 Police arrested a man accused of robbing a family with a chainsaw at a southwest Oklahoma City convenience store, and then breaking into someone else's home.

According to police, at about 8:40 p.m. Monday, officers responded to the report of suspicious activity in the 2400 block of S.W. 44th Street. When officers arrived, they were flagged down by a man in the street, later identified as the suspect, 34-year-old Michael Justin Pierce.

Pierce reportedly told officers that some “tweakers” driving a gray Dodge Durango were trying to kill him. Police said Pierce was very anxious. He could not sit still and seemed to be under the influence of a narcotic.

A short time later, police said the gray Dodge Durango pulled up behind the officers' car. At that point, Pierce reportedly pointed at that vehicle and said, “There are the tweakers.”

Police then spoke with a woman in the Durango, who was very upset and crying hysterically. The woman told officers that Pierce had tried to kill her and four others in her vehicle, including three children, earlier at the Shell Gas Station at 44th and S. Agnew.

The woman said she and her family were in the parking lot when Pierce approached them and said, “Give me all your money now, or I will kill everyone in the car, even those kids.” The woman said she saw a green chainsaw in Pierce's hand. Pierce then started it up and began lunging it forward towards the victims.

The woman said she feared for their lives. They took off from the parking lot and she called 911. Officers responded to that 911 call, but were unable to locate anyone in the area.

A short time later, officers said they received another call. The caller stated that they heard a loud crash from their back door and saw Pierce entering their home. Pierce reportedly kept yelling at them, “They are trying to kill me.”

Pierce, police said, admitted that he likes to smoke K2, but he said he was not high the night of the incident.

Pierce was arrested and booked into the Oklahoma County Jail on complaints of robbery with a dangerous weapon and first-degree burglary. A bond has not been set.