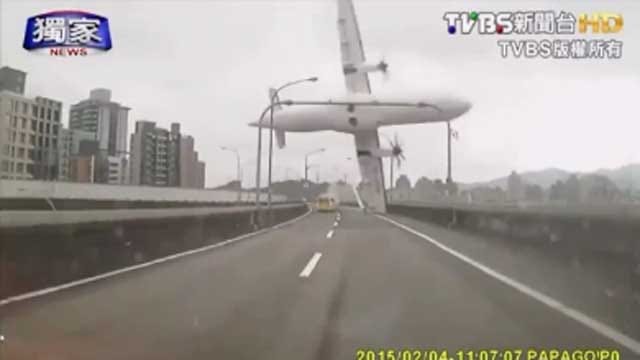 A Taiwanese flight with 58 people on board turned on its side in midair, clipped an elevated roadway and careened into a shallow part of a river Wednesday shortly after takeoff from the island's capital of Taipei. At least 23 people were killed, government officials tell CBS News.

Fifteen others were hurt and 20 were unaccounted for, the officials said.

The death toll from the TransAsia Airways Flight GE235 was expected to rise as rescue crews cleared the mostly sunken fuselage in the Keelung River a couple of dozen yards from the shore. Teams of rescuers in rubber rafts clustered around the wreckage.

The ATR 72 prop-jet aircraft was flying on its side when one wing scraped Taiwan's National Freeway No. 1 just seconds before it plunged into the river, local television images showed.

The Reuters news agency says, "Dramatic pictures taken by a motorist and posted on Twitter showed the plane cartwheeling over a motorway."

It was the airline's second French-Italian-built ATR 72 to crash in the past year.

Officials from the Taiwan Civil Aeronautics Administration (CAA) told CBS News the plane sent out a "Mayday" signal at 10:54 a.m. local time, two minutes after it took off.

Wu Jun-hong, a Taipei Fire Department official who was coordinating the rescue, said the missing people were still in the fuselage or had been pulled downriver.

"At the moment, things don't look too optimistic," Wu told reporters at the scene. "Those in the front of the plane are likely to have lost their lives."

Rescuers were pulling luggage from an open plane door to clear the fuselage, and Wu said they planned to build a pontoon bridge to facilitate those efforts.

The plane's wing also hit a taxi, the driver of which was injured, on the freeway just before it crashed into the river, Taiwanese broadcaster TVBS reported.

A TransAsia media office declined comment on possible reasons for the crash, deferring to a news conference scheduled for later on Wednesday. Taiwan's CAA also was also unable to discuss possible causes of the crash.

Another ATR 72 operated by the same Taipei-based airline crashed in the outlying Taiwan-controlled islands of Penghu last July 23, killing 48 at the end of a typhoon for reasons that are still under investigation.