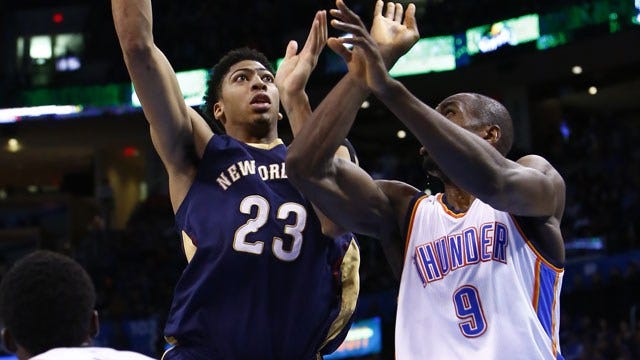 Fans never go to a game expecting to see a classic. Classics are unscripted, as just another game slowly transforms into the stuff of legend—a story that gets told again and again.

Friday night produced one of those games as Oklahoma City and New Orleans traded sensational plays, head-scratching mistakes and a duel between two of the planet's best players. In the end, it was the Pelicans coming out on top, 116-113, as Anthony Davis' buzzer-beating 3-pointer will be the shot that's remembered in the coming days and weeks.

With just 1.2 seconds on the clock, Davis flashed open at the top of the 3-point line and took the inbounds pass from Tyreke Evans. As he rose to shoot, he had to double clutch, as Kevin Durant flew by, nearly blocking the shot. When Davis did finally let it fly, its path was true, a knife in the gut of the Thunder.

It was Davis' first 3-point make this season and the win gave New Orleans the tiebreaker over the Thunder, should the two teams be tied in the standings come playoff time. The Pelicans won the season series, 3-1.

The incredible finish overshadowed a career night from Russell Westbrook. Two nights after tying his career-high against these same Pelicans, Westbrook raised the bar for himself, scoring 48 points while dishing out 11 assists and grabbing nine rebounds. His final three points came just moments before Davis' heroic shot, as Westbrook was fouled by Quincy Pondexter while trying to tie the game with a 3-pointer. Westbrook coolly buried all three free throws, knotting the score at 113.

It was clear how important this game was to OKC from the get-go. The Thunder played with incredible energy the entire night, and Durant didn't take a seat the entire second half. While the loss is disappointing, Oklahoma City looked like the Thunder team everyone expected to see this year. It's coming at the right time, but time is of the essence. The Thunder is still out of the eighth playoff spot by three games, and now has to deal with the tie-breaker issue with the Pelicans.

Not only that, but 20 of Oklahoma City's remaining 30 games come against teams that would be in the playoffs if they started today.

Durant's return from a toe injury wasn't as smooth as you'd expect it to be. He finished with 27 points but needed 26 shots to get there. He was just 4-of-17 from the field in the second half, several of those from close range. In a grueling game, he simply looked a bit tired by the end after playing just once in the last 12 days. The good news was there seemed to be no ill effects from the toe injury that kept him out.

Serge Ibaka and Steven Adams both scored 10 points, but the Thunder got almost nothing from the bench unit. That group allowed the Pelicans to climb back into the game in the second quarter and then take control of the game in the third and fourth quarters.

Up 76-64 with six minutes remaining in the third quarter, the Thunder went cold from the field while the Pelicans went on a 19-5 run to close the period. The run continued into the fourth quarter, as New Orleans grabbed an 88-81 lead before OKC called timeout to stop the bleeding.

Davis finished the game with 41 points and 10 rebounds while Evans had a triple-double of 22 points, 16 assists and 10 rebounds. Ryan Anderson and Quincy Pondexter provided a big boost off the bench, scoring 17 and 15 points, respectively.

Oklahoma City found itself on the short end of a classic on Friday night and will have to pick itself up off the mat to take on the Clippers on Sunday. Classics are fun for the fans watching, but for the players, it can be uplifting or crushing.

Friday was crushing for the Thunder and now the key becomes the response.