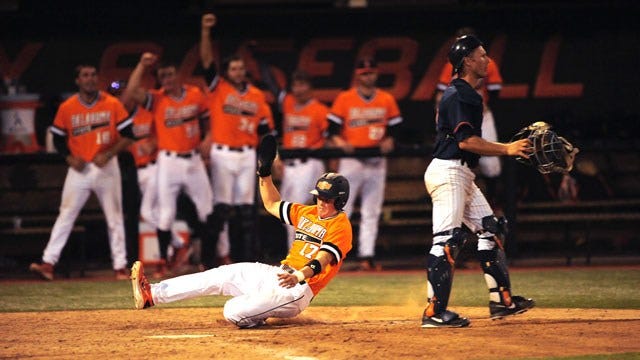 Oklahoma State picked up its first win of the year Sunday as the No. 5 Cowboys knocked off 18th-ranked Arizona State, 9-8, in front of 3,229 fans at Phoenix Municipal Stadium.

The Cowboys tallied a six-run third inning to take a lead they would never surrender as head coach Josh Holliday's club held on late to avoid the series sweep and move to 1-2 on the season.

“It was another game where mistakes and opportunities were plentiful on both sides, and two teams were fighting hard,” Holliday said. “I'm proud of our team. It was the first time this season that our character was questioned going into game three of a series down 0-2, and our character was revealed. Our kids came out and played hard and had good energy.

“Today was a step in the right direction, and we'll take this weekend as a learning experience and build on the win today.”

Kevin Bradley led an OSU offense that collected 10 hits with a 2-for-3, three-RBI day that included the Cowboys' first home run of the season. Dustin Williams and Ryan Sluder each drove in a pair of runs for the Pokes, while Gage Green and Tim Arakawa had two hits apiece.

Remey Reed was one of seven Cowboy pitchers on the day and earned his first-career win with a scoreless inning of relief, while Koda Glover worked a perfect ninth inning to collect the first save of his career.

The game's pivotal inning came in the top of the third. After Corey Hassel and Gage Green reached on hit by pitches, Arakawa continued his hot hitting with an RBI double to get the Cowboys on the scoreboard. Following a walk that loaded the bases, Williams stepped to the plate and delivered a two-RBI single to right field to push OSU's lead to 3-0 and drive ASU starter Darin Gillies from the game.

The Cowboys were just getting started. After another walk again loaded the bases, Bradley collected the first of his RBIs with a sacrifice fly, and Sluder followed with a two-RBI double down the left field line to give OSU a 6-0 advantage.

ASU had been blanked by Cowboy starter Michael Freeman over the first four innings, but the Sun Devils rallied for three runs off the senior southpaw in the bottom of the fourth to cut their deficit in half.

OSU answered with two more runs in the fifth as Bradley deposited an Eli Lingos pitch over the wall in right-center field for a two-run homer that gave the Cowboys an 8-3 lead.

Freeman began the fifth on the mound but left with a runner on and two outs. Trey Cobb came out of the bullpen and issued a walk and a two-RBI double to pinch hitter Jake Peevyhouse before the Cowboys got out of the inning with an 8-5 lead.

Holliday was pleased with the effort from Freeman, who made just his second-career start after pitching in only 10 games last season.

“To get a quality start out of Mike Freeman was a big thing when your bullpen isn't as deep in game three as it is in the first couple of games of a series,” Holliday said. “Mike did a good job of taking us into the fifth and almost through the fifth, and that's what we needed.”

The Sun Devils continued to chip away at the OSU lead, scoring twice in the sixth before a solo home run off the bat of Colby Woodmansee in the seventh cut the Pokes' lead to 9-8.

In the eighth, ASU got the tying run on base when Garrett Williams issued a leadoff walk to Johnny Sewald. But Reed came out of the bullpen and promptly got Jordan Aboites to ground into a double play before inducing Christopher Beall into an inning-ending groundout.

In the ninth, Glover came on and slammed the door on ASU's hopes for a comeback as he struck out Trever Allen before getting a pair of fly outs to end the game.

“They pecked away at us, and it was tough to get a zero in the middle innings – they're a very resilient team,” Holliday said. “We mixed and matched and maneuvered our way through, and we ended up on the other side of this thing okay.”

OSU returns to action in this week's Big 12/Pac-12 Challenge and will open tourney play against Oregon State Thursday at 2 p.m. (CST) in Surprise, Ariz.