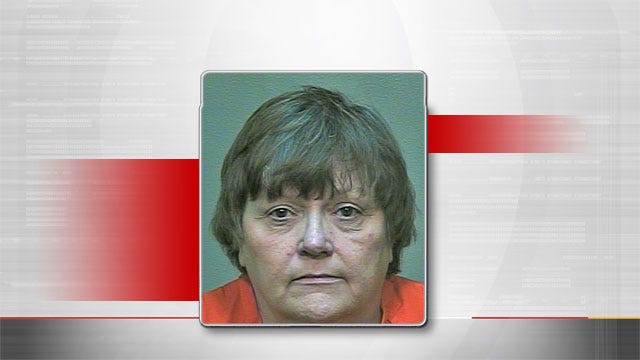 A Mustang woman was arrested in the brutal attack of her 90-year-old mother in Oklahoma City. Police said the woman used a Taser on her mother, and even strangled and tried to suffocate her during the assault.

According to police, just before 9 p.m. Sunday, officers responded to the report of a domestic incident at a home in the 10000 block of S. Douglas Avenue in Oklahoma City.

The victim's son told police that his sister, 62-year-old Sheila Middlebrook, had tried to kill their 90-year-old mother. Police said the victim does not have a history of Dementia or any other mental health conditions.

Police then spoke with the victim, who said Middlebrook came over to her home unannounced to collect her mail at about 3:30 p.m. The victim said Middlebrook had lived with her for about eight years until September, 2014.

After tazing her mother, Middlebrook reportedly stated, “I thought that would kill you.” Police said Middlebrook then began beating her mother with her hands. She knocked the victim down on to the floor and began to strangle her.

According to police, in an attempt to suffocate the victim, Middlebrook used a rag to cover the victim's mouth and nose. The victim said this lasted about one minute.

During the attack, the victim said she tried to push Middlebrook off of her. But it was unsuccessful because of Middlebrook's strength and weight. However, police said the victim did not lose consciousness during the entire assault.

Middlebrook eventually ended the attack and left the victim lying on the kitchen floor. Police said it took the victim about two and half hours to make it to her bedroom, because she could not walk. Officers at the scene said there was a trail of blood leading from the kitchen to the bedroom.

The victim was transported to OU Medical Center. Police said there was blood coming out of her ears. The top of both her arms were covered in deep red bruises. Her left eye and upper lip were swollen.

As of Tuesday morning, News 9 confirmed that the victim remains in the hospital.

Police arrested Middlebrook in Mustang. She was booked into the Oklahoma County Jail on multiple complaints, including domestic assault with a dangerous weapon (Taser,) domestic abuse by strangulation, aggravated assault, and assault and battery.