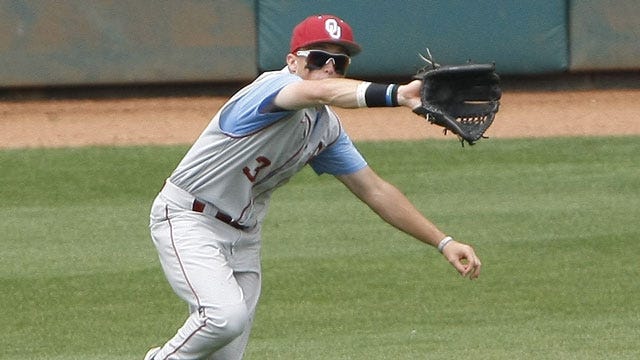 Sophomore right-hander Alec Hansen struck out eight across seven-scoreless innings to lead the Oklahoma baseball team to a 7-1 win over Purdue in front of 1,409 in attendance at L. Dale Mitchell Park, Saturday evening. The win pushed the Sooners to 11-6 on the season, while the Boilermakers dropped to 5-8.

“It's a three-game series, if you lose game one you have to get used to getting back into the series,” commented head coach Pete Hughes. “Forcing the game-three, a rubber-match, we have to get used the ebbs and flows and emotions of a series. I thought our guys responded really well today and came out with a good pregame and a really good mindset as you saw us come out with a one-two-three in the [top of the] first inning. That is the way to bounce back from a loss. That was a really good sign in the growth of our program right there. This puts us in good shape for tomorrow.”

Hansen (2-1), whose fastball was consistently 93-95, touched as high as 97 on the radar gun as he allowed just three hits and two walks. He led an OU pitching staff that totaled 11 strikeouts, recording 10-plus for the ninth time this season.

“I thought [Hansen] threw a lot of strikes with his fast ball. Even his misses were good. That is when I know Alec is on; when his misses are good. He was in the zone and his fastball was really good today; he threw some great ones. His cutter really was not there. Coach [Jamie] Pinzino mixed it in that change up in is breaking ball and gave him a different look but he (Hansen) made it with his fastball.”

Sophomore shortstop Sheldon Neuse picked up four of Oklahoma's eight hits in the game as he went a perfect 4-for-4 at the dish. He scored three runs and drove in two, including a solo home run off the batter's eye, 411' to deep-center.

“He is in the three-hole and when you get Sheldon out there you know it is going to be an RBI situation; it is going to be a productive game. There are always a couple guys in the lineup that when they are going it takes the pressure of the rest of the guys and it gets everyone else going.”

The Sooners jumped out to a 3-0 lead in the first inning. Junior center fielder Craig Aikin led off with a single through the left side to extend his hit streak to 11 games. An error put two runners on and Neuse plated the first run of the contest with a double down the left field line to score Aikin. Two more runs came in on RBI groundouts by junior first baseman Anthony Hermelyn and junior left fielder Hunter Haley.

Junior catcher Chris Shaw extended the OU lead to 4-0 with a solo homer to left in the second. Shaw and Neuse have each hit three home runs in the last four games.

Singles by redshirt-senior right fielder Taylor Alspaugh and Neuse started off the third inning. After each advanced on a fly ball, junior second baseman Kolbey Carpenter delivered both to the plate with a single through the left side to push the lead to 6-0.

Purdue avoided the shutout with a run in the top of the ninth. Right fielder Alec Lund knocked in the Boilermakers' only run of the game with a two-out single that travelled just to the left of the pitcher's mound. First baseman Kyle Wood and Lund each recorded two-hit games for Purdue.

The Sooners and Boilermakers take the field for the rubber-match Sunday at noon. Senior lefty Jeffrey Curran takes the mound for Oklahoma.

· Oklahoma starting pitchers have lasted six or more innings in eight out of 17 games.

· The Sooner pitching staff has struck out 10 or more batters nine times; all coming in the last 11 games.

· Oklahoma played error-free baseball for the seventh time this season and turned its 18th and 19th double play of the year.

· Neuse posted the first four-hit game for OU since Aikin did so against Texas Tech (5/22/14) in the Big 12 Tournament. Neuse matched a career-high in hits; last totaling four against UT-Arlington (3/11/14).