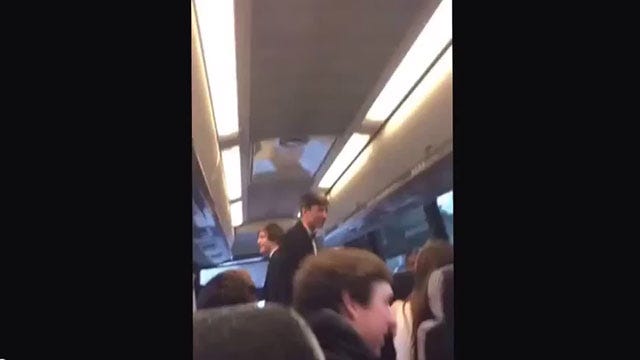 University of Oklahoma President David Boren has expelled two students, identified as playing a leadership role in the singing of a racist chant in connection with an SAE fraternity event.

On Tuesday, Boren said that the students who played a leadership role had created a hostile learning environment for others. The chant was not only heard by those on a bus, but also impacted the entire university community as it was also distributed through social media.

“I have emphasized that there is zero tolerance for this kind of threatening racist behavior at the University of Oklahoma. I hope that the entire nation will join us in having zero tolerance of such racism when it raises its ugly head in other situations across our country. I am extremely proud of the reaction and response expressed by our entire university family - students,faculty, staff, and alumni about this incident. They are 'Real Sooners' who believe in mutual respect for all. I hope that students involved in this incident will learn from this experience and realize that it is wrong to use words to hurt, threaten, and exclude other people. We will continue our investigation of all the students engaged in the singing of this chant. Once their identities have been confirmed, they will be subject to appropriate disciplinary action.”

The University said it does not plan on releasing the names of the two students, since the information is protected under the Family Educational Rights and Privacy Act.

President Boren spoke before the OU Board of Regents Tuesday afternoon. He said SAE members were going to a Founder's Day party at OKC Golf and Country Club.

Boren said it was a date party, so there were dates from all across campus and sororities.

Boren wondered if other SAE chapters sing this song. "How general is this?" He asked.

According to Boren, a female on the bus took the video and is cooperating. She was offended.

Boren said he won't identify the students who were expelled, but said, “It won't be too hard for the media to find those names.”

“I don't have bad feelings, I don't hate any students, but I hope these two young men and others involved in this will learn from this,” President Boren said.

Boren praised the reaction of students, student athletes and the way they're coming together.

He said he hopes it continues a dialogue about race.

OU Board of Regents was not expected to discuss the incident beyond Boren informing them earlier of the expulsion of students and severing of ties with SAE chapter.

“When people engage in racist actions or racist words, there has to be consequences. We cannot tolerate it,” Boren said.