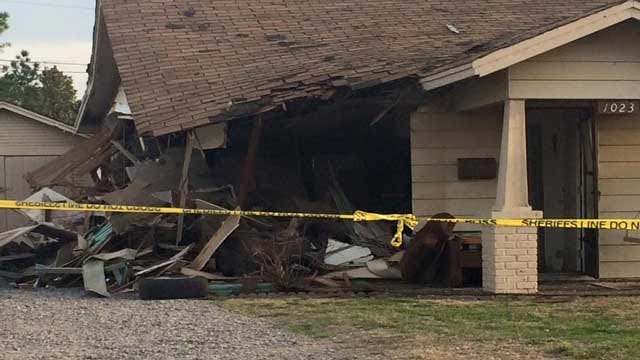 Elk City police said a 19-year-old died after crashing a stolen vehicle into a home during a high-speed chase early Tuesday morning.

According to police, at about 12:43 a.m. Tuesday, officers located a stolen 2005 white Jeep Liberty in the Queen City Mobile Home Park.

Officers said they attempted to stop the vehicle, driven by 19-year-old Connis Ray Knorring, but Knorring accelerated and drove onto Randall at a high rate of speed. That's when the pursuit began.

At one point, police said the suspect's vehicle reached 90 mph. The Jeep continued north on Randall to the intersection of 2nd street, where it reportedly lost control.

The vehicle over corrected to the right, striking the curb, causing the vehicle to be catapulted into the home located on the northeast corner of 1st and Randall, according to police.

Knorring died at the scene due to injuries sustained during the crash.

A 57-year-old woman was asleep in the room that the Jeep crashed into, according to police. The woman suffered multiple injuries and was transported by Elk City EMS from the scene straight to the heli-pad, where she was medi-flighted to OU Medical Center. Police said the woman remains in serious condition.

The home also sustained structural damage due to the crash.

Knorring was also being investigated as a suspect in a larceny that happened last Sunday night. Police said he was recently charged with larceny of a vehicle. He had pleaded guilty in Beckham County District Court in February, and was out on bond awaiting sentencing scheduled some time in May.