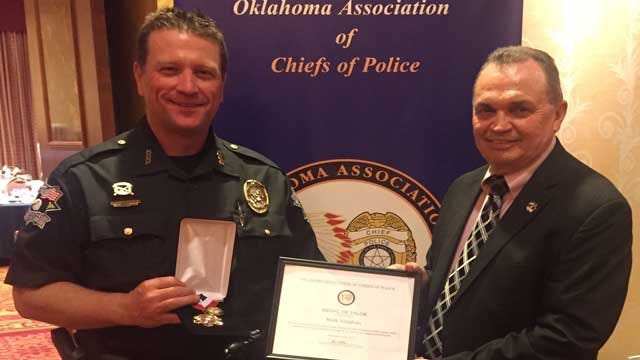 Oklahoma County Reserve Deputy Mark Vaughan received the Oklahoma Association of Chiefs of Police Award of Valor for his heroic acts in stopping a violent attack at Vaughan Foods in Moore, Oklahoma.

On September 25, 2014, the suspect, 30-year-old Alton Nolen who had just been fired from the business, beheaded 54-year-old Colleen Hufford and stabbed 43-year-old Traci Johnson in the front office area at Vaughan Foods.

Off-duty reserve deputy Mark Vaughan, who is also the COO of the business, fired shots at Nolen and ended the attack. Johnson survived.

"Mark Vaughan's dual role as both armed citizen and reserve deputy sheriff ensured that he was at the right place at the right time last Sept. 24 when employees at Vaughan Foods in Moore had to fight for their lives. On that day, Vaughan was going about his daily duties as chief operating officer when terrorism struck the Sooner State.

When he received an emergency call, Vaughan didn't yet know that a recently fired employee, had already beheaded 54-year-old grandmother Colleen Hufford and was continuing his attack.

He immediately exited his office and went down to his personal vehicle where he keep an AR-15 rifle. He donned a vest that said County Sheriff on it and ran about 130 yards to the customer service area. People were exiting the building, people were crying and screaming. It was a very chaotic situation. The attack occurred during a shift change and there was a lot of employee activity in the area. Some employees were kicking, hitting, throwing chairs and books but they were unable to stop the attacker. He was determined, and he chased several off with a knife.

When Vaughan entered the building, he couldn't believe the carnage he saw. But he knew he had to do something to stop the attack. "When I first arrived down that hallway, the suspect was attempting to behead a second woman, Traci Johnson. I could see the knife raised above his head and strokes with the knife, blows with the knife,” Mark said. “I yelled at him to stop and he did. He took a few steps toward me and then disappeared in another hallway. I ran after him.”