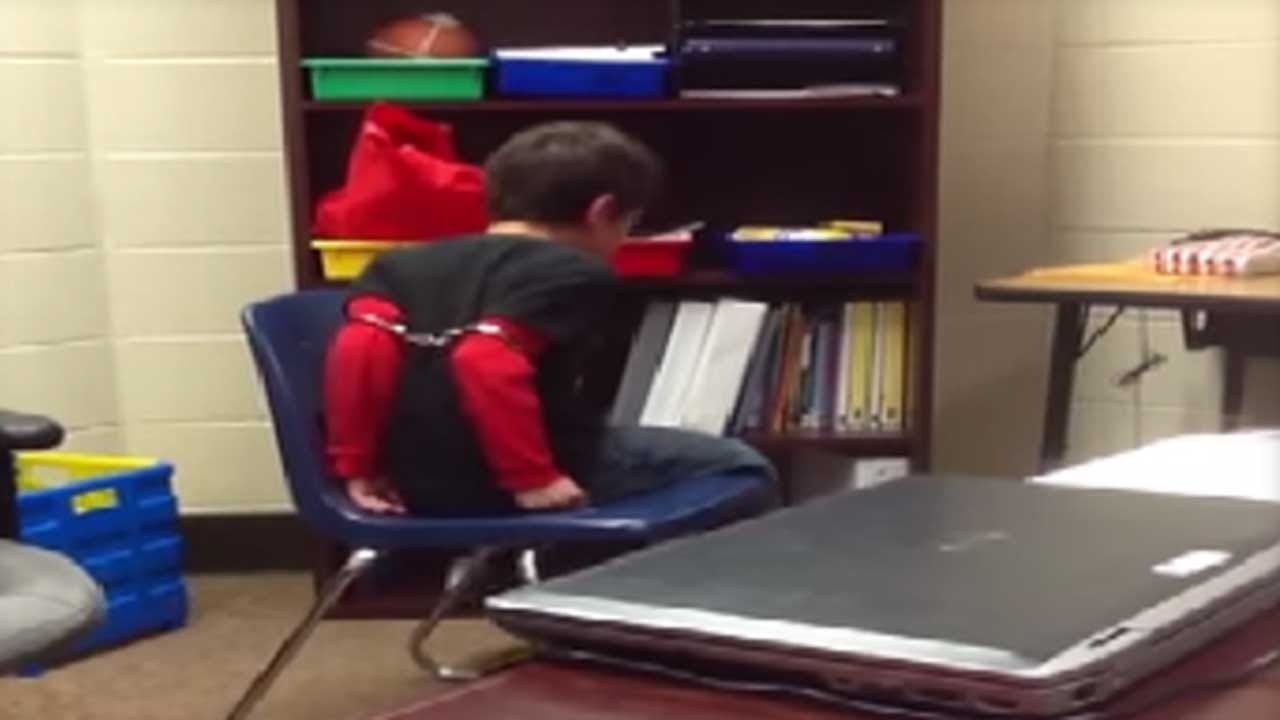 Two northern Kentucky women have sued a county sheriff and one of his school resource officers for placing their two disabled elementary school children in handcuffs.

The handcuffs were too large to fit around the wrists of the 8-year-old boy and the 9-year-old girl, both of whom have been diagnosed with attention deficit hyperactivity disorder and are identified in court documents only by their initials. The boy also has a history of trauma, CBS affiliate WKYT reports.

School Resource Officer Kevin Sumner put the handcuffs around the children's biceps, locking their arms behind them. A video of one of the incidents shows the 8-year-old boy struggling and crying while sitting in a chair.

"You don't get to swing at me like that," Sumner told the boy, according to a video that was captured by a school administrator and uploaded to YouTube by the American Civil Liberties Union, which is representing the women and their children. "You can do what we've asked you to, or you can suffer the consequences."

A federal lawsuit says the boy - 3 feet 6 inches tall and 52 pounds - was removed from class last August because he was not following his teacher's directions. The boy then tried to leave the principal's office but was physically restrained by school administrators until Sumner arrived to escort the boy to the bathroom.

On the way back from the bathroom, the boy tried to hit Sumner with his elbow, according to a report from the Kenton County Sheriff's office cited in the lawsuit. That's when Sumner put him in handcuffs.

The 9-year-old girl, who weighed about 56 pounds, was sent to an isolation room at her school last August for being disruptive. School officials asked Sumner to help after the girl tried to leave the room and was restrained by the principal and vice principal. A report from the sheriff's office said Sumner put the girl in handcuffs because she was "attempting to injure school staff."

Attorney Rickell Howard with the Children's Resource Center in Covington told CBS affiliate WLKY that the officer went too far.

"Both of the cases Officer Sumner was called to respond and that's where we have his reaction, which was to restrain the children using mechanical restraints, which are handcuffs," Howard said.

The lawsuit said the experience caused "a severe mental health crisis" and Sumner called for a "medical crisis team." The girl was taken by ambulance to a hospital for a psychiatric assessment and treatment.

The lawsuit asks for a judge to ban the school from doing this again and for money to compensate for the pain and emotional trauma and for attorneys' fees.

Kentucky state regulations ban school officials from physically restraining students that they know have disabilities that could cause problems.

The lawsuit says officials at both schools were aware of the students disabilities, which including "impulsivity, and difficulty paying attention, complying with directives, controlling emotions and remaining seated."

"Shackling children is not okay. It is traumatizing, and in this case it is also illegal," Susan Mizner, disability counsel for the ACLU, said in a news release.

Col. Pat Morgan with the Kenton County Sheriff's Office declined to comment, saying the office had not been officially notified of the lawsuit. Robert Sanders, Sumner's attorney, said Sumner put the children in handcuffs because "they were placing themselves and other people in danger of harm and that's what the book says to do."