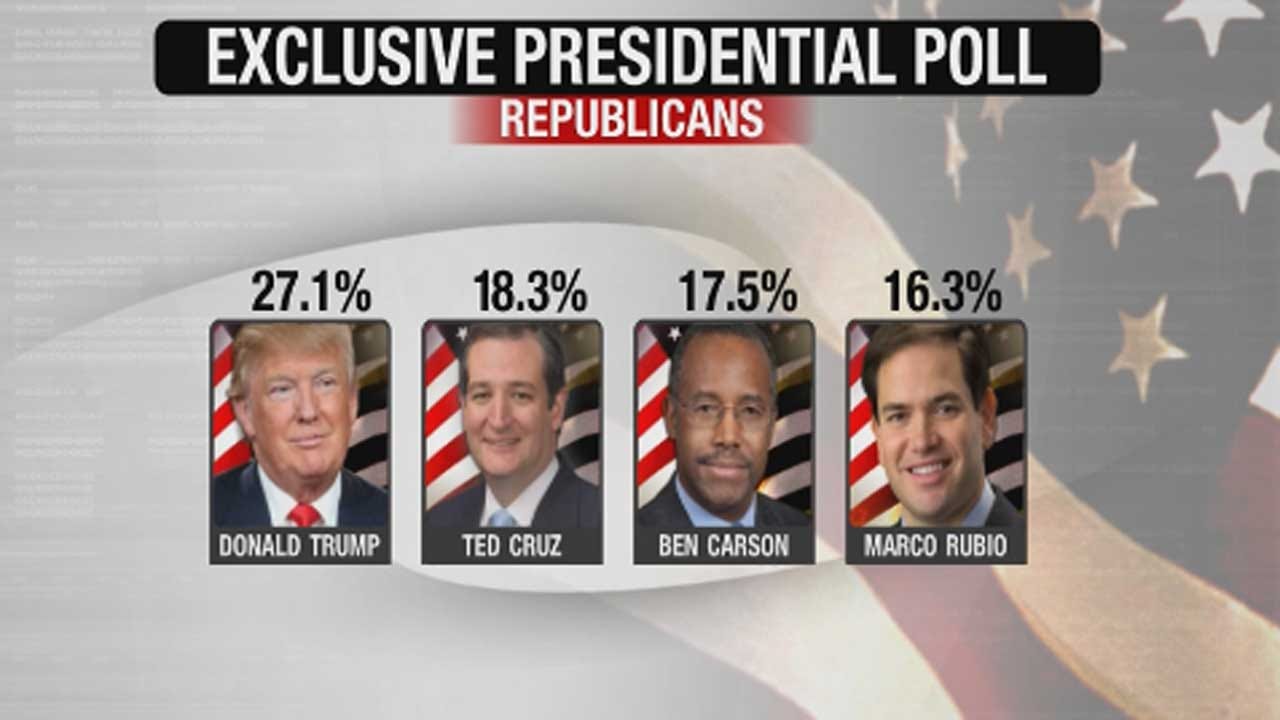 Donald Trump and Hillary Clinton remain the top choices for president among Oklahoma voters, according to an exclusive News 9/News On 6 poll.

If Oklahoma's March 1 primary elections were held today, 27.1 percent of state Republicans say they would vote for Trump. Clinton controls nearly half of the Democrat primary vote, 46.6 percent, according to the poll.

Trump, who has remained the national GOP front-runner, leads Ted Cruz (18.3 percent), Ben Carson (17.5 percent) and Marco Rubio (16.3 percent) in the state. The rest of the Republican field -- Mike Huckabee, Carly Fiorina, Jeb Bush, Rand Paul and John Kasich -- are all in the single digits. Nearly seven percent are undecided and 2.5 percent prefer someone else.

Shapard warns a lot can happen between now and election night, especially as candidates drop out of the race and votes shift to others.

"What's interesting in this poll is that we've seen movement among Ted Cruz and Marco Rubio. These two gentlemen, both U.S. Senators, are beginning to show more depth to the issues they're aware of. I think the red-hotness of Trump is beginning to wear off a little bit."

In October, another firm's poll showed Trump trailing Carson in Oklahoma, however Shapard points out that poll surveyed registered voters. The News 9/News On 6 poll targets likely voters, who he contends show up on Election Day and are the true measure of the electorate.

According to the News 9/News On 6 poll, nearly half of Oklahoma's Democrats support Clinton over challengers Bernie Sanders (12.2 percent) and Martin O'Malley (39.1 percent.)

Shapard says the most telling number is the 39 percent who say they're undecided.

"When you find that this many Democrats in Oklahoma are still undecided, it basically says these folks really do not like Hillary Clinton, they don't really want to vote for her and are more likely to vote for the Republican in the general election."

News 9 and News On 6 will be tracking the presidential candidates all the way through Election Day.

About the polls: SoonerPoll conducted the survey by phone November 12-15, 2015 of likely voters, registered to vote in Oklahoma. Our poll surveyed 389 Republicans and 369 Democrats. The margin of error is +/- 5.1 percent. The results were weighted by age, sex and political party and stratified to Oklahoma likely voter demographics.