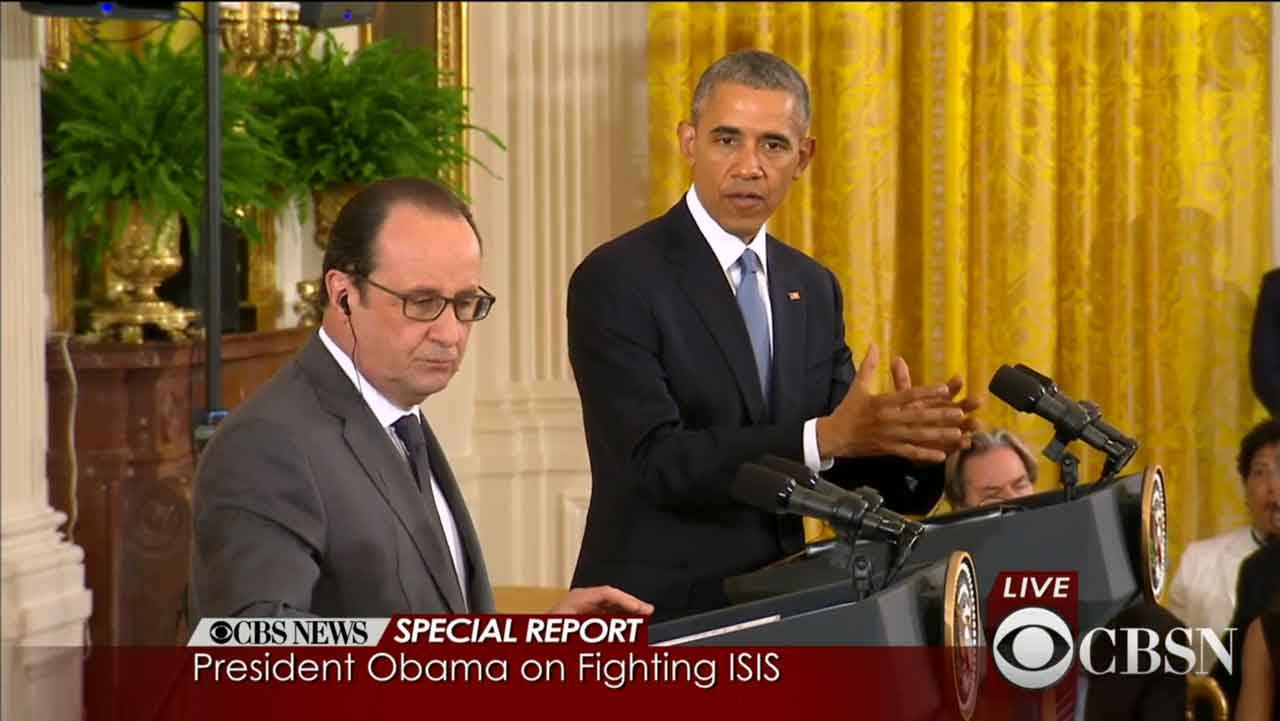 President Obama on Tuesday vowed to work even more with allies like France to prevent further terrorist attacks from groups like the Islamic State in Iraq and Syria (ISIS).

"Today, [French President] Francois Hollande and I agreed that our nations must do even more together," Mr. Obama said at a joint press conference at the White House with Hollande. "We'll do even more to prevent attacks at home."

The two leaders met before the press conference in the Oval Office, 11 days after the Paris terrorist attacks that left 130 people dead and several hundred injured and as parts of Europe still remain on high alert.

"This was an attack on our free and open societies where people come together to celebrate, sing and compete," Mr. Obama said. "It was an attack against the world itself."

The president said for over a year, the U.S., France, and roughly 65 other nations have been working to defeat ISIS, which Mr. Obama said has been pushed back in Iraq and Syria as a result of more than 8,000 coalition airstrikes.

Mr. Obama said the U.S. will do more to quickly share threat information with France, and called on the European Union to implement an agreement to require airlines to share passenger information.

The two leaders agreed that Russia could play a more constructive role in Syria, Obama said, if it shifts its airstrikes strategy to target ISIS militants rather than Syria's moderate opposition. They also agreed that Russia should support a ceasefire in Syria that would make for a government transition away from Syrian President Bashar al-Assad.

And as the holiday season kicks off, Mr. Obama sought to calm Americans' concerns.

"I understand that people worry that something similar will happen here. I want you to know that we will continue to do everything in our power to defend our nation," he said in a message to the country.

But amid the increased vigilance, the president warned that Americans shouldn't give in to fear or allow fear to divide the country.

"That's how terrorists win," he said.

Hollande's visit to Washington comes a day after he met with British Prime Minister David Cameron in Paris and a day before Hollande is set to meet with Russian President Vladimir Putin in Moscow.

Vice President Joe Biden discussed the threat Monday behind closed doors with ambassadors representing the 65-nation U.S.-led coalition against ISIS at the State Department, which also issued a worldwide travel alert for U.S. citizens later in the day.

"Extremists have targeted large sporting events, theatres, open markets, and aviation services. In the past year, there have been multiple attacks in France, Nigeria, Denmark, Turkey, and Mali," the alert said.

Since the attacks in Paris, the president and other Obama administration officials have defended the current U.S. strategy against the terrorist group as they've faced questions from Republicans and Democrats alike about whether it's actually an effective plan.

On Monday, Mr. Obama returned from a nine-day trip to Turkey, the Philippines and Malaysia that was largely overshadowed by questions regarding the U.S. strategy and demands to pause the administration's plan to welcome at least 10,000 Syrian refugees over the next year.

Two-thirds of Americans, meanwhile, believe the administration lacks a clear plan to defeat ISIS, according to a CBS News poll released Monday. Less than a quarter of the public believe it does have a clear plan.

Half of the public now favor sending U.S. ground troops to fight ISIS in Iraq and Syria, up 4 percentage points from August.

Another CBS News poll released Monday found 69 percent of people believe a terrorist attack in the U.S. is very or somewhat likely to occur in the next few months.