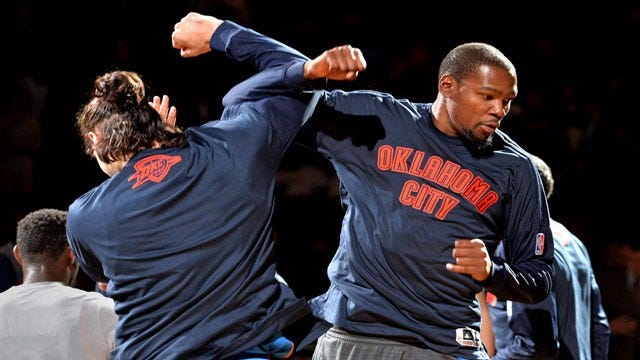 The red-hot Thunder had no problems with the rebuilding Trailblazers on Wednesday night, winning 106-90 just one day before a showdown with LeBron James and the Cavs.

This was a stroll-in-the-park type of night. Kevin Durant dropped 24 points on 8 of 14 shooting while the rest of the roster spread the wealth. Twelve OKC players scored, including six in double digits. Dion Waiters chipped in 18 points off the pine while Russell Westbrook and Serge Ibaka each added 13. Enes Kanter finished with 12 points and 13 rebounds.

The blowout allowed the Thunder to rest their core players on the opening night of a back to back. OKC (17-8), winner of six straight, had no player play 30 minutes or more. That’ll come in handy in Thursday’s contest in Cleveland.

Portland was as hapless as expected. The Blazers (11-16) were as hapless as expected. Damian Lillard and C.J. McCollum combined to score 44 points, but Portland is just a shell of its former self after losing LaMarcus Aldridge, Nic Batum Robin Lopez and Wes Matthews in the offseason. Mason Plumlee chipped in a double double with 14 points and 10 boards.

The Thunder shot 48 percent from the floor but just 14 percent from deep. OKC outscored the Blazers 48-34 in the paint, 16-8 on the fast break and shot 19 more free throws than did Portland.

Thursday’s trip to Cleveland will be the first meeting between the two title contenders this season. The Cavs, however, will likely play without Kyrie Irving as he continues to recover from an injury.