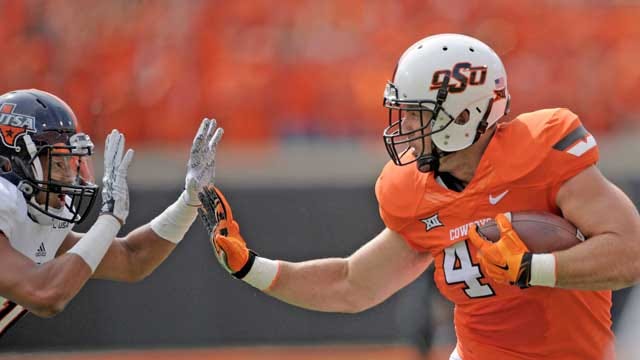 Oklahoma State coach Mike Gundy and selected members of the football team visited with media Monday in Boone Pickens Stadium to preview the Cowboys' Sugar Bowl matchup against Ole Miss. Among other things we learned that the Cowboys are leaning toward starting backup J.W. Walsh at quarterback rather than risk Mason Rudolph's long-term health.

Opening statement:
“We’ve worked out several times and things are going together really well. Health-wise, Mason (Rudolph) is going to take some team reps today. He’s out of his boot, and he’s moving around better. We’re going to give him about 10 or 12 plays during the team period. Jeremy Seaton and Blake Jarwin are back to playing. For the most part as Mason comes along, we’re a healthy team. Our practices have been good. We’ve worked very hard. We’ll work out today and then have off tomorrow. We’ll work out Wednesday morning then we’ll let them go and meet back up at the bowl site.”

On who will start at quarterback:
“We’ve leaned more on J.W. (Walsh) because we have to facilitate our team at this time. If Rudolph’s healthy, then we’ll have to make a decision in the middle of bowl practice on how to distribute reps. It’s a difficult question to answer, but I would say that with the increased role and number of practice reps that J.W. has gotten, we would expect him to play at least half the game either way, depending on Mason’s health.”

On his previous bowl meetings with Ole Miss:
“My first one was when I was here with Coach (Les) Miles and we played really well. Eli Manning kept the ball away from us at the end of the game. It was a close game. In the Cotton Bowl, we played terrible. It was one of those games that when it was over, it bothered me because we just didn’t play well. There are games that we’ve lost that I was OK with because we had a good plan, the players played hard, but they beat us. We just did not play well in the Cotton Bowl. I think there were about eight turnovers, so it was just not good. There wasn’t a lot to talk about in that game.”

On Ole Miss losing a defensive player:
“It doesn’t really have any factor in how we prepare. Obviously he’s a good player and he makes the difference in a game, but it doesn’t change our approach and what our schemes are going to be.”

On what the Cowboys need to do in the Sugar Bowl:
“I don’t know exactly how much ground we can make up on either side of the ball. There’s two things that need to happen in this game. We need to play better and be more gap sound on defense to stop the run than we were in the last few weeks of the season. On offense, we have to find a way to establish 125 yards of rushing to balance out our ability to thrown the ball down the field and use a passing game that can give us the chance to score some points. We’ve stressed that. We’re coaching it. We’re working hard on it. The players feel that.”

On changing the routine for Christmas:
“I've done it for so long now that I'm familiar with how to do it. The first couple years in my career was tough. There's a small window there. You have to mix in your practice times and your prep times with getting online and ordering gifts.”

On analyst Darrell Wyatt:
“He's stayed a week ahead, so on a Sunday when we're practicing for that opponent during that week, he's already on the next opponent. On a Sunday when I come in and grade our film, he'll sit down with me and the staff and we'll watch tape. We go over some things that he's seen tendency-wise, and tempo from the other team. In the NFL, they call that advanced scouting. It's an advanced scouting report. He gives me good information so I can start planning for that opponent.”

On the advantage it provides:
“It gives us an advantage. It saves me some time. It can kick start us, and give us some ideas. When Sunday evening practice comes, we are more familiar and up-to-date on what you are going to see next week.”

On the Ole Miss defensive depth:
“They have a lot of depth, which is important because they are always rotating guys onto the field. That's why they play with such good speed and tenacity. Their depth is critical to them. They do a good job of getting to the ball, and pursuing the football. They have a tremendous pass rush and defend the ball well. It will be a challenge.”

On Ole Miss secondary:
“I wouldn't say they have a definite weakness in the secondary, but, I would say that they're so impressive up front that people are trying to throw the ball on them. The alternative is to pass the ball on them and if you can get it off, then you have a chance to move the football. They are very athletic up front, and they beat people one-on-one up front.”

On David Glidden:
“He's been a very good leader for us. He knows exactly what to say to the guys. David is an emotional leader. When you are looking for someone to fire the team up, he's that guy. David is always in a good mood. He's trying to help the team as best as he can.”

On what winning the Sugar Bowl would mean:
“It would be really cool just to win a game with this type of magnitude. Winning this game would really mean a lot to me.”

On reflecting on his career:
“This past month has been nice to have this time off, but now we are starting to practice again. It's becoming where every practice is now one less practice. It's coming to a close, and a couple of our guys have sat down and reflected on our careers. We have talked about a lot of the moments that have happened throughout our four years. You always have to remember the good things about being here.”

On what winning the Sugar Bowl would mean:
“It would be a great way to cap off the career here with this group of seniors. It was an exciting season. The regular season didn't end the way we wanted it too, but it would be great to bring back the win to the Oklahoma State family.”

On his career:
“When I came in, I was already hungry. I was ready to show everyone what I could do. You don't get as many shots to do that when you come from a small school like I did. Guys like Justin Gilbert really showed me that once you get to this level, everyone is on the same level as you. It's the same playing field, everyone has the same opportunity to do the same things. You have to put yourself above people.”

On the legacy of his career:
“You always have some thoughts from certain games. You missed a tackle, you gave up a touchdown, things like that, but I don't regret anything that I've done here. This has been the most enjoyable part of my life. All of my best friends are her. I feel like I've been able to do the right things here to set myself up to continue on the right path for the rest of my life.”

On stopping the Ole Miss offense:
“They have a physical front. They are able to run the ball, and their quarterback is very talented. He can run, he can throw and he makes a lot of people miss. We have to stay sound in tackling and making sure we're in the right spot at the right time.”

On Ole Miss quarterback Chad Kelly:
“He makes people miss. He's able to get space, and he's a very physical player. He's another guy out there that's able to run the ball.”

On the break:
“It was great. Throughout the course of the season, your body gets beat up. It's nice to have some time off to let your body rest and recover, and to spend time with your family. It's always refreshing.”

On the offensive play after the break:
“The first few days after a week off I noticed a little bit of rust. However, we've spent a lot of time scrimmaging against the defense and I think that's been nice to have full-speed scrimmages. It's good for us to get back in the swing of things.”

On what he is most thankful for with his transfer experience:
“I think up in Indiana my family made seven or eight games in four years. They made every home game this year, and the game in Austin. They've been able to come to more games in one year than they did my entire undergrad career at Indiana. Being able to share this experience with my family has made it that much better. I don't regret it at all.”

On what is next:
“I'm going to continue grad school. I'll be taking 9-12 hours next semester with the majority online so I can continue training to boost my resume. I am continuing to pray that I get the opportunity to make a roster next year.”