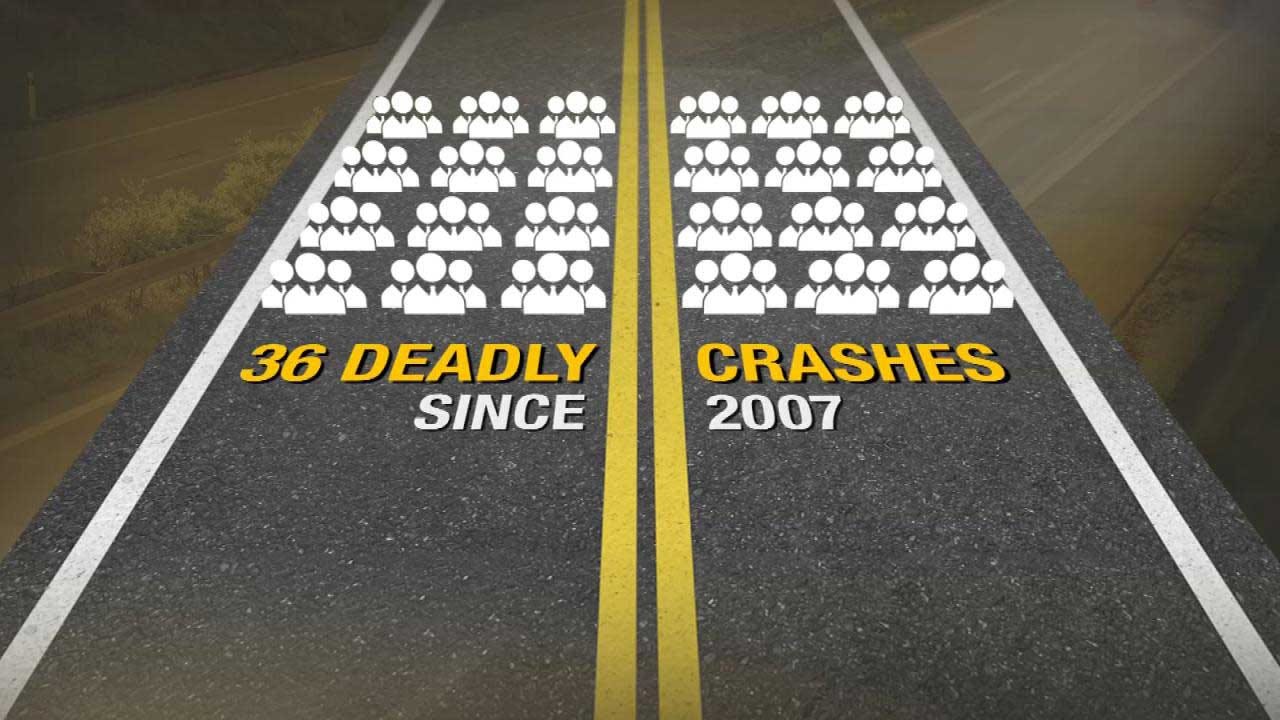 In the past eight years, 36 people in Oklahoma died in crashes involving trucks hauling oilfield wastewater and equipment.

An investigation by News 9's Allison Harris and our partner, The Frontier, found that about 7 percent of the truck companies licensed for this work have been involved in deadly accidents.

“Multiple people can and have been killed, and, who’s next?”

Kyle Randall narrowly escaped death when an oilfield truck, hauling wastewater, blew past a stop sign a two-way stop off S. Calumet and West Reno in El Reno. It slammed into his driver's side, pinning him under the truck for over an hour.

Kyle's dad remembers watching over his comatose son for 12 days.

“It wasn’t easy. All I could think about is, you know, is he going to make it?” said Richard Randall.

The Randall's sued Rick's, a subsidiary of TruEnergy based in Ada, along with several energy companies.

Audio recordings between Rick's dispatchers and drivers were introduced in the case:

(Rick’s Recording): “With the lights not working and the steering wheel broken, it’s really not that bad of a truck!”

There are 358 trucking companies licensed in Oklahoma, working for some of the biggest energy companies operating in the state.

Rick's is just one of two dozen companies with trucks involved in at least 36 deadly crashes in the state since 2007. Nine of those companies had two deadly accidents each. Another 54 people have been injured in accidents with oilfield trucks in the past two years.

The deaths and crashes are happening all across Oklahoma -- mostly on rural state and county roads.

“The truck drivers think they can get by with anything and everything, and right now, they are,” said Richard Randall.

The Federal Motor Carrier Safety Administration rates trucking companies on safety. Seven of the 24 companies involved in those deadly crashes have conditional ratings - the lowest rating a company can have and still be in operation.

Among those companies - Rick's.

(Rick’s Recording): “He says he has no brakes and I don’t know the condition that it’s in, and with him being so young and inexperienced.”

Additional federal records show Rick's also cited for failing to test drivers for drugs and alcohol after accidents, which is required by the Federal Government. One of the drivers the company failed to test -- James Griffin, the driver of the truck that hit Kyle.

Court records show Griffin was later convicted for failing to stop at the stop sign, causing Kyle's accident, and for carrying weight over the 34,000 pound legal limit.

The Randall's case is in the discovery process, with a pretrial conference set for June.

In pictures before the accident, Kyle Randall is a healthy 25-year-old. Afterward, his arm is held together with a metal rod. His foot is paralyzed. He can't drive or walk upstairs, and he struggles to remember things.

“I do not want to die. My life has meaning. I do know that. What’s that meaning for? I have no idea. Maybe it’s to help stop some drivers from doing what they’re doing,” said Kyle.

Rick’s, TruEnergy, and the Federal Motor Carrier Safety Administration did not respond to News 9’s calls for comment.