5 Things That Get Snapped Up In 'Blizzard Buying' 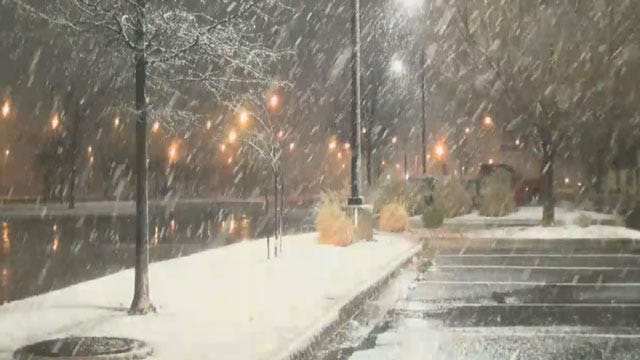 When winter weather gets unpredictable, Americans predictably rush to their local stores in an effort to stock up in the staples.

Unfortunately, what Americans think of as "staples" aren't always what the experts recommend people keep on hand during a major snowstorm. And then there's the issue of price gouging (er, in-demand pricing) when some stores put out racks of snow shovels or flashlights at temporarily elevated prices.

With the first major winter East Coast storm of 2016 slated to hit at least 15 states this weekend, stores are already suffering from empty shelves, with one customer complaining the bare aisles looked like something out of East Berlin.

The storm will cover some regions that are relative strangers to snow, like the Tennessee Valley and some Southern states, which means many residents may not have kind of equipment and staples -- snow shovels and salt, for instance -- that those in colder states tend to keep on hand.

While consumers stock up on food, they're also increasingly concerned about how to keep entertained if they're snowbound at home, notes Kristin Cook, managing editor of Ben's Bargains, a deal and coupon site.

"Now it's less of even the emergency items, and more about wanting to know how they'll be entertained if they are stuck at home," she said. "Like, 'How am I going to watch Netflix'" if the power goes out.

Kroger (KR), the grocery chain, said it works with a weather service that provides detailed forecasts, allowing it to ship in on-demand items before storms hit. Sales have been higher at its stores since Monday, said spokeswoman Allison McGee, who added she's based in Roanoke, Virginia, which is slated to get 17 inches of snow. Customers are snapping up some of the staples listed below, as well as prepared foods like rotisserie chicken and fresh foods such as bananas, clementines and steaks.

To avoid getting slammed on prices, Cook recommends shopping at dollar stores for basics, given that those retailers fix their prices at $1. Be skeptical of drugstores or convenience stores with front-of-the-store displays of flashlights, batteries and other basics because they might be tagged with temporarily higher prices, she added.

Below are five items that get snapped up before a major storm, and some options that experts suggest adding to a pre-storm shopping trip. The Centers for Disease Control and Prevention advises that Americans have a week's worth of supplies on hand.

Fresh milk. Yes, it's a staple, but add bottled water to your shopping list as well because it has a longer shelf life and can be essential if pipes freeze and cut off access to drinking water. Other good options for shelf-stable beverages are powdered milk and sports drinks like Gatorade.

Bread. Photos of empty bread shelves on Twitter illustrate that this staple is the go-to purchase for many panicked consumers before a storm. But if you're stuck inside for a while, bread can go stale or get eaten quickly. The CDC recommends also buying carbohydrates that will remain edible longer, such as crackers.

Meat. Kroger notes that its shoppers are buying fresh steaks, chicken breasts and hamburgers, but it recommends customers also add canned goods and nonperishable items to their lists, such as canned tuna or soups.

Batteries. These are essential for keeping your flashlights and radios working if the power goes out, but Ben's Bargain's Cook also recommends also buying portable charging packs for devices like mobile phones and iPads. Consumers without landlines will need to ensure they have continuous phone service, which might be at risk if the power goes out. Plenty of low-cost options are available at sites such as eBay (EBAY) and Amazon (AMZN). Along those lines, charge up your devices before the snowflakes start falling.

Alcohol. "You can tell if a storm is coming because the liquor stores are crowded," Cook joked. Based on Twitter comments about the storm, stocking up on liquor, beer and wine appears to be a major preoccupation. While Americans may not want to give up on their liquid comforts during a bad storm, don't forget to make sure you're stocked up with your prescription medication before the bad weather arrives.

5 Things That Get Snapped Up In 'Blizzard Buying'