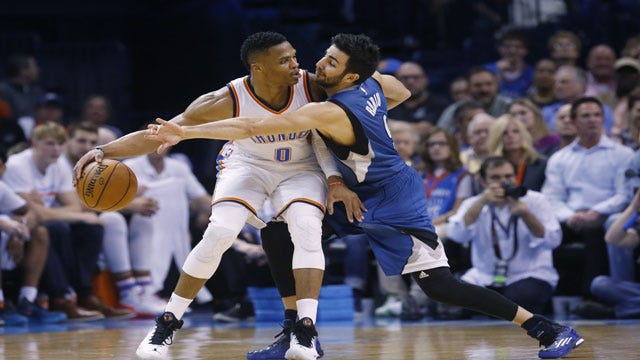 After splitting their double dip in New York City, the Thunder (34-13) heads to Minnesota for a Wednesday bout with the Timberwolves (14-32). Here are a few things to know:

The Thunder has handled most clubs pretty well over the past few seasons, but perhaps none more so than the Wolves. OKC has won nine straight over Minnesota and 23 of its last 26.

These two cities have a lot in common when it comes to the NBA. Smaller, Midwest markets that are largely unappealing to top free agents. That means you gotta build through the draft, and no franchise, perhaps excluding the Warriors, has done that better than Oklahoma City. Minnesota’s record doesn’t show it, but the future seems pretty bright. The Wolves are stockpiling young prospects, including a pair of superstars in Andrew Wiggins and Karl Towns. Minny might not be a punchline for too much longer.

Both Kevin Garnett and Kevin Martin are expected to miss the game for Minnesota, which is a real shame. That’s because with Kevin Durant suiting up for OKC, we could have potentially seen a new NBA record for Kevins on the court at one time. Not sure if three Kevins is actually the record, but it’s gotta be close. Real missed opportunity.