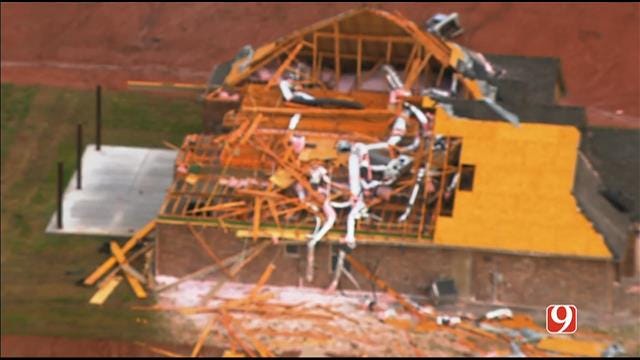 One Luther family was in bed watching the storm coverage when, at the last minute, they decided to leave and take shelter at a neighbor's house.

“That was a large covered porch,” said homeowner Tony Rumpl. “It tore the entire roof off of that along with two thirds of the roof of the house.”

Rumpl took News 9 on a tour of what's left of his brand new home.

“Something just told us this is serious, we need to just go ahead and leave,” said Rumpl. ”And thank goodness we did because we only missed this by 10 minutes.”

Some of the rooms are just fine, like his oldest daughter's bedroom, but others are in shambles.

“This is the other daughter's room,” said Rumpl. “It’s totally destroyed.”

But the family heeded the warnings they saw on television, and took shelter inside a neighbor's basement.

When they came out, they saw parts of their home spread all over the lawn, and insulation covering their cars.

“All the kids were pretty tore up about it,” said Rumpl. “This is our first new home and they lost it when we got back and they saw all the destruction.”

Rumpl said the one thing their dream home did not have was a storm shelter.

“Had planned on it, we just hadn't got to it yet,” said Rumpl. “Now it’s a priority. We're not going to be caught in this predicament again.”

He said friends and family came to help last night as soon as they heard.

He even got a call from the governor. That's because he is one of the troopers who provides security at the mansion.

“My thoughts and prayers are with Trooper Tony Rumpl and his family as they deal with the destruction of their home by last night’s storm. Trooper Rumpl has worked for years protecting the Governor’s Mansion. I’m thankful no one was injured, and pray for strength and resiliency for him and his family as well as all Oklahomans who sustained damage to their homes or businesses from last night’s storms,” Gov. Mary Fallin said in a statement.

Rumpl said he is grateful of the support his family has been receiving since the storm.

“We're very grateful for all the support we've received from my department, the community, my family,” said Rumpl. “We had an unbelievable amount of people here last night right after the event just offering any help they could give.”