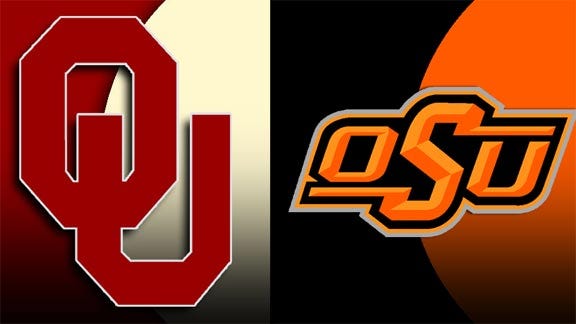 For the first time since 2010, the Sooners baseball team was able to win The Bedlam Series as Oklahoma handed the 12th-ranked Cowboys a 3-1 loss in the series finale Sunday at ONEOK Field.

With the loss, OSU had its streak of three-straight Big 12 Conference series wins snapped as the Cowboys fell to 13-8 in the league and 32-17 overall .

Trey Cobb suffered the loss to fall to 4-7 despite allowing just two runs on four hits while striking out eight. The right-hander also issued three walks in a 119-pitch effort over six innings.

After retiring OU's first two hitters of the game, Cobb gave up back-to-back singles to Steele Walker and Sheldon Neuse. Up next, Cody Thomas stepped to the plate and continued his hot hitting as he delivered a triple to center field to put the Sooners up, 2-0.

The Cowboys trimmed their deficit in half in the third against OU starter Dylan Grove, a freshman making only his second start and ninth appearance of the season.

OSU's run also came with two outs as Corey Hassel singled and stole second before Walton brought him home with a single to make it 2-1.

With the Pokes still facing the one-run deficit in the seventh, Ryan Sluder tried to jump start a rally as he singled up the middle. After the OU left fielder bobbled the ball, Sluder raced for second, but he was thrown out on a bang-bang play by center fielder Alex Wise.

OU added an insurance run off Tyler Buffett on an RBI double by Cade Harris in the ninth before Neuse took the mound in the bottom of the inning and retired the Cowboys in order to seal the win.

The Cowboys finish the regular season against OU with a 2-2 mark, winning a non-conference affair in Norman on April 19 as well as Saturday's game in Tulsa.

OSU returns to action Tuesday with its final non-conference game of the regular season when the Cowboys return to Tulsa to take on Oral Roberts.