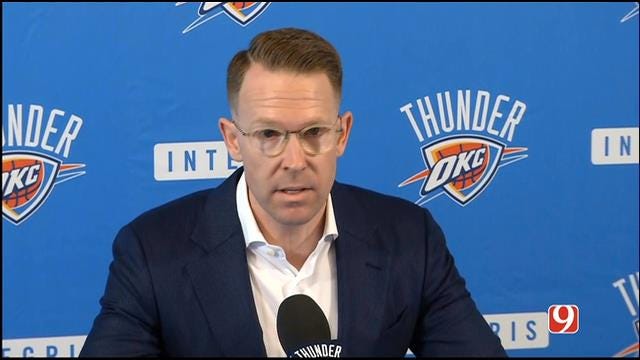 Sam Presti held his exit interview at the Thunder’s practice facility on Monday. The 39-year-old GM recapped the past year for the Thunder, quoted the 26th President of the United States and praised Billy Donovan and Kevin Durant individually.

“The legacy for this organization is largely an unwritten book,” Presti said. “This past season was certainly an incredible chapter to be associated with.”

“Obviously in terms of the season, we’d love to still be playing. We’re disappointed we couldn’t find a way to win the seventh game but I think our team really understands and respects the battle of competition and for sure we respect our opponents and tip our cap to Golden State.”

Presti summed up the season with a 1910-era Teddy Roosevelt quote: “A great man is someone that spent itself on a worthy cause.”

“Kevin deserves a tremendous amount of credit for the way he’s handled his affairs because what it really did was allow our team to focus on the season and really made the season we had possible,” Presti said of soon-to-be free agent Kevin Durant. “I thought it was a tremendous example of a franchise player putting the franchise first.”

Check out the full interview above for more of Presti’s thoughts.