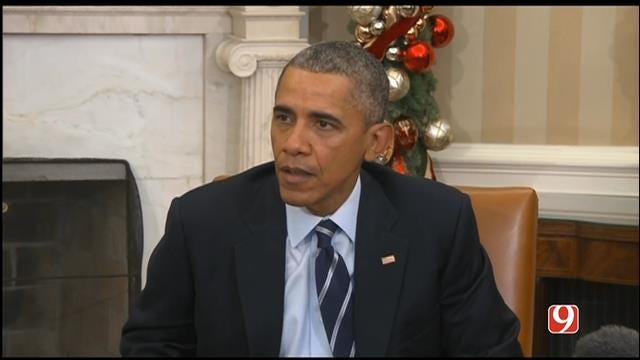 President Obama announced Wednesday a slight drawdown of U.S. forces in Afghanistan, telling reporters that about 8,400 American troops will remain in the country at the year's end -- a higher number than the 5,500 he had hoped to have in Afghanistan by the end of his presidency.

"The security situation in Afghanistan remains precarious. Even as they improve, Afghan security forces are still not as strong as they need to be," Mr. Obama said from the White House's Roosevelt Room, noting that "the Taliban remains a threat."

"As president and commander-in-chief, I will not allow Afghanistan to be used as a safe haven for terrorists," he added, saying that "it is in our national security interests" continue supporting the Afghan security forces.

The United States, then, would "maintain approximately 8,400 troops in Afghanistan into next year," the president declared.

"Even as we've maintained a relentless case against those threatening us, we are no longer engaged in a major ground war in Afghanistan," Mr. Obama said, pointing out that "fewer than 10,000" troops remain in the region to focus on the "narrow missions" of training and advising Afghan forces in counterterrorism efforts.

"But even these narrow missions continue to be dangerous," he added.

The president was joined by Secretary of Defense Ash Carter and Chairman of the Joint Chiefs of Staffs Gen. Joseph Dunford.

Earlier this month, Carter reportedly told NATO allies that the U.S. could reconsider withdrawing its thousands of troops from Afghanistan by 2017.

According to British Defense Secretary Michael Fallon, Carter told allies that "the troop numbers and the dispositions are being looked at again."

The last time Mr. Obama gave a statement on Afghanistan from the White House, he announced that the U.S. would slow the pace of its troop draw-down in the country.

"While America's combat mission in Afghanistan may be over, our commitment to Afghanistan and its people endures," the president said in October of last year. "I will not allow Afghanistan to be used as a safe haven for terrorists to attack our nation again."

In October, Mr. Obama said that American troops -- approximately 9,800 of them -- would remain on the ground to stick to a "narrow but critical" mission of training Afghan forces to fight terrorism in the region.

The president is heading to NATO Thursday to discuss the military presence in Afghanistan with the coali‎tion.