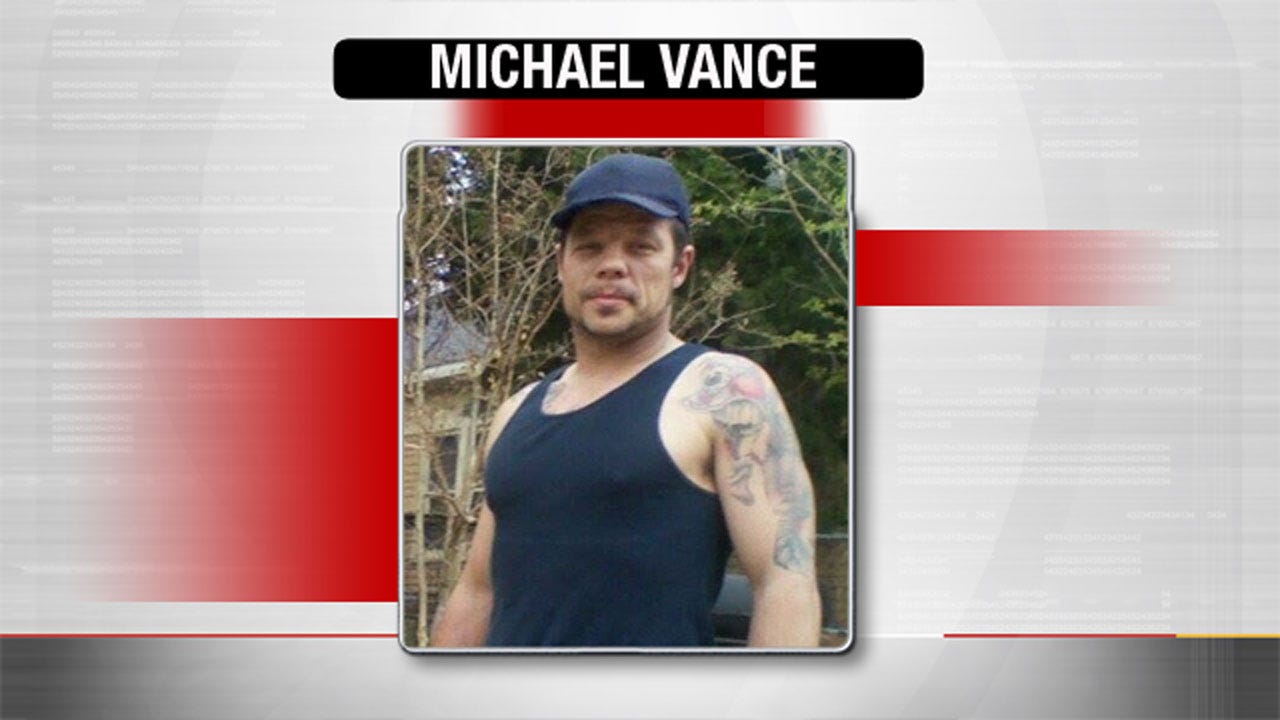 An arrest warrant has been issued Monday morning for a man wanted in connection to a multi-county crime spree, including the shooting of two Wellston police officers and two homicides in Luther, Oklahoma.

According to an affidavit filed in the Oklahoma County District Court, Michael Dale Vance Jr., 38, is wanted on two counts of first-degree murder, one count of unauthorized use of a motor vehicle, and possession of a firearm after former felony conviction. Court documents also stated that on July 22, Vance was charged with child sexual abuse after former felony convictions.

Authorities said the officers, Shawn Stewart and Jimmy Hampton, responded to a disturbance involving Vance and another man, Tony Heavner. However, documents say Vance shot the officers while they were being questioned.

Wellston officers returned fire. Heavner says he was taken in for questioning and released a short time later. Police say Vance got into a police vehicle and left the scene.

While leaving the scene, Vance posted a Facebook Live video saying he was in pain and there was what appeared to be blood on his shirt. He went on to say that he was going to steal another car and, “this s*** is going to be intense.”

In a second Facebook Live video posted by Vance, he was seen in a different car. A weapon, believed to be a rifle or shotgun, can be seen next to Vance in that video. Vance also stated he had been shot.

Investigators said Vance then carjacked a woman at a nearby mobile home park and shot her. He left the scene in the woman’s Lincoln Towncar.

At about 9:30 p.m. Sunday, authorities said the woman's Lincoln Towncar stolen by Vance was seen at a home in the 17000 block of N.E. 206th in Luther. The Oklahoma County Sheriff’s office’s Tactical Team responded to the home and found two people, later identified as Ronald Wilkson and Valerie Kay Wilkson, dead on this property. Authorities said the two were Vance’s family members.

Deputies obtained a search warrant. They entered the home and found a pink t-shirt Vance was seen wearing on his Facebook Live videos before the victims’ deaths. Investigators also found two shell casings. The particular round is traditionally fired from an AK-47 style rifle.

Initial reports indicate that Ronald Wilkson was shot one time. Wounds found on his body were consistent with an attempt to sever his head. Investigators said they saw a large cut on his neck.

Valerie Wilkson had multiple stab wounds, believe to be defensive wounds on her arms. She also had a large cut on her neck, and a large cut in the arm/shoulder area. The size and depth of that cut led investigators to believe that Vance was trying to remove her arm.

Investigators found a large knife that appears to have blood on it in the kitchen sink.

The victims’ family members told investigators that the victims’ Mitsubishi Eclipse with an Oklahoma Tag 943-LQQ was missing.

Shooting of Store Clerk in Sayre

At about 4 a.m. Monday, authorities received a call from the Oklahoma State Bureau of Investigations that a suspect matching Vance’s description has just shot a store clerk at the Flying J in Sayre, Oklahoma. The victim, who was shot twice in the leg, was able to give investigators a description of the suspect’s vehicle, which matches the car taken from the scene of the homicides in Luther.

In this case, authorities said Vance tried to steal the victim's vehicle but was unsuccessful. He then left the scene in the Eclipse.

Vance remains on the run. The Sheriff's office said Vance may have returned to the Oklahoma County or Lincoln County area, and others may be in danger. Vance may also be looking to carjack or steal another vehicle.

According to the Beckham County Sheriff's office, information received from the Oklahoma Fusion Center is that Vance could possibly be in a white 2014 Chevrolet Sonic bearing OK tag 327-LIH.

If you see Vance or the vehicle, do not approach, call 911 immediately.

The Oklahoma Highway Patrol confirmed with News 9 that Vance has AIDS/HIV and is willing to spread it.

Law enforcement officials have established a hotline to deal specifically with tips regarding the search for Vance. That hotline number is (405) 246-9205 and will be manned 24/7 by U.S. Marshals.

This is a developing story. News 9 and News9.com will keep you updated.