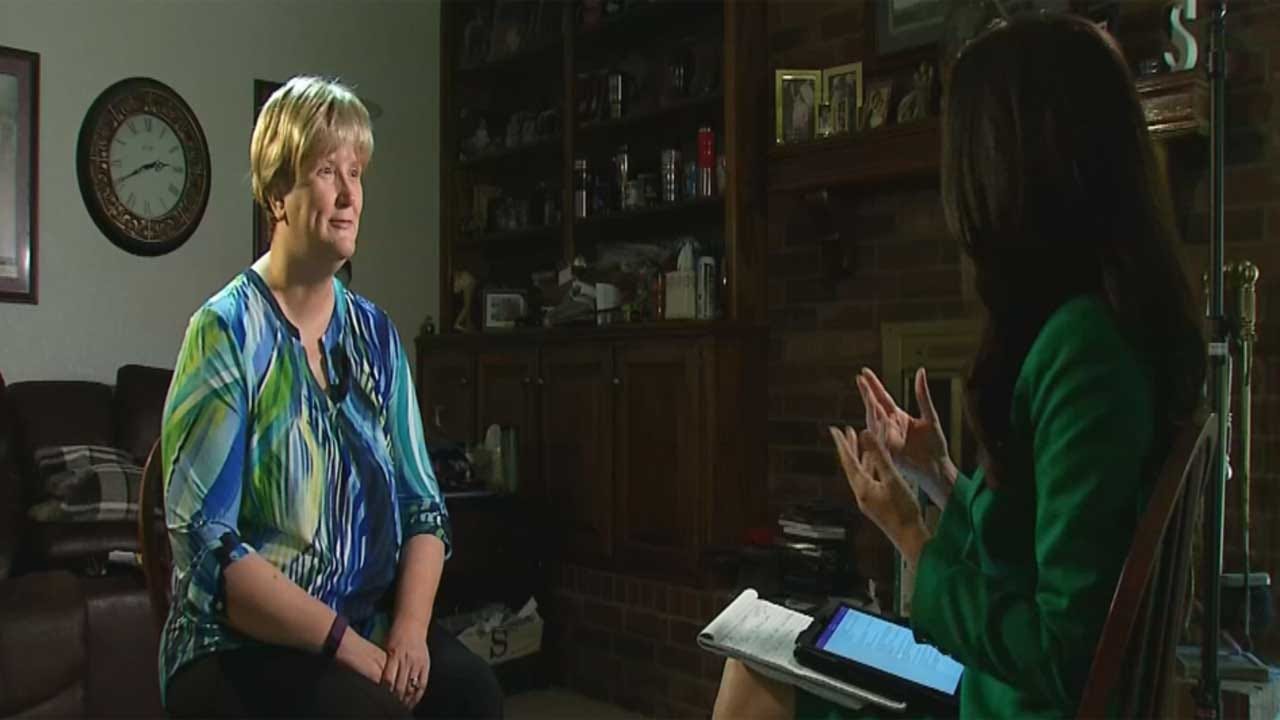 An Oklahoma woman beat breast cancer but says the drug she took to fight it, has a lasting side effect that has her in tears. It's a drug that's commonly prescribed and it's now changed her looks, permanently.

"I never was a girly girl," said Connie Shatswell. "My hair was the one thing I knew could make me look more like a girl."

Shatswell, of Mustang, knew when she went through breast cancer treatments back in 2010, chemotherapy would cause her thick brown hair to fall out. She just never imagined the hair loss would be permanent.

"People look and they have a sympathy look," she said. "I look like I have cancer."

She doesn't have cancer. In fact, she's been a cancer survivor for almost six years. However, no one could tell her why her hair never grew back, until recently. She saw a post on social media that pointed to the chemotherapy drug Taxotere as a possible culprit.

Five years before she ever took the drug, the maker, Sanofi and Aventis, did its own study and found that Taxotere caused about nine percent of its patients to lose hair permanently. They warned patients in other countries; yet, no warning was ever put on the drug in the U.S., until last year.

Oklahoma attorney Markoff now represents more than 200 women who have similar complaints. He said what's important to realize, is patients could have used another drug without the permanent hair loss risk.

"It's simply about choice," Markoff said. "Why not give these women the opportunity to make their own choice.  Tell them there are two drugs. They work the same, one of them you have a 9.2 percent chance of never growing your hair back. The other you have 100 percent chance that your hair is going to grow back. And you ask them and you tell them, you give them that choice and you know which one they're going to choose? Every time, they're going to choose the one where their hair is going to grow back."

News 9 called drug maker Sanofi Aventis and they appear to be blaming the FDA for how long it took to get a warning on the label. Here's part of the company's statement:

"As early as 2004, Sanofi submitted data about persistent alopecia (or hair loss) to the FDA as part of a proposed Taxotere label update.  In December 2015, following discussion between FDA and Sanofi, the label was updated to reflect that cases of permanent alopecia have been reported following use of Taxotere, although at an unknown frequency. We encourage you to speak with the FDA regarding the timeline of the label update."

So News 9 did that as well. A spokeswoman with the FDA said it wasn't until 2015 patients started contacting the FDA complaining about permanent hair loss. After some research, the FDA decided to change the warning label.

As for what happened prior to 2015, the FDA's not commenting only to say that labeling updates is an ongoing process. Shatswell is just hoping someone's held accountable for not letting her know of the lasting effects.

"Anybody that has hair, they have bad hair days and get so upset," she said. "Can you imagine looking in the mirror and not seeing you? The you, you know?"

News 9 did talk to a local oncologist who said even with the known risk now of permanent hair loss, that may still be the preferred treatment for some. Taxotere is stronger which means it doesn't have to be taken as frequently as the alternative.